Julie Jirečková is one of the female pioneers of photographic art in our country. She was the first amateur whose pictures were published in Fotografický obzor/Photographic Horizon, a Czech photography magazine. Jirečková was inspired by traditional landscape painting; her view of the world was formally influenced by Art Nouveau morphology. To increase the picturesque nature of her photos, she tinted them, using the shaping and expressive possibilities provided by refined photographic techniques. The picture Pole/A Field was probably taken near her birthplace, a villa situated in the "Na Vinici" neighbourhood near Vysoké Mýto. Jirečková devoted her life to art; she never married or had children. 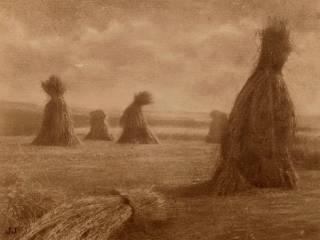