Photography, among other art forms, became an ideal and modern medium for exploring and documenting the newly discovered world of peripheries, waste dumps and secluded recesses, so often sought-after by authors from the Skupina 42 group. The fast photographic technique could bring "so many miraculous surprises," as Jindřich Chalupecký (1910–1990), the theorist of the group said. However, the only outstanding photographer in Skupina 42 was Miroslav Hák. At twenty-five he showed his ability to see the world poetically and his sensibility for random meetings of incoherent elements stood out at the International Photographic Exhibition in Mánes in 1936. His work contains pictures of Prague yards, the Libeň gasholder as well as of walls in Smíchov. There are also photographs of "hanging clothes" (Ve dvoře/In the Yard, 1943) that resonated with the poetics of Josef Kainar (1917-1971), another member of Skupina 42. In his poem Stříhali dohola malého chlapečka/They Cut Off the Little Boys Hair, he desribes a poetic scene in this way: "he sits in the cafe below his coats // like below young hanged men." 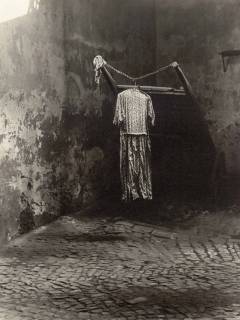