Uprka attended the German gymnasium in Strážnice (1874–1878) and the Slavic gymnasium in Olomouc (1878–1881) and then he enrolled in the Academy in Prague. He studied under František Čermák and later under Antonín Lhota, with whom he did not get along. This is why he decided to continue his studies at the Academy in Munich in 1884 under Nikolaus Gysis and later Otto Seitz. In 1885 he co-founded a Czech academic group called Škréta which published a magazine called Paleta. He also contributed to Světozor and Zlatá Praha. In 1887 he returned to the Prague Academy and studied under Max Pirner, but he left after two semesters and moved to Moravia. There he painted scenes from country life in his home region. His first paintings were done the style of naturalism. In 1892 he received a scholarship to visit Paris where he met Zdenka Braunová, who became his friend. He returned to Moravia in 1893, but he first visited London, the Netherlands and Munich. In Paris he was inspired by Impressionism and en plein air painting. However, Tomáš Vlček (2011) thinks that Uprka’s typical colourful dots, which he used as an expression of emotions, were not inspired by French Impressionism but by folk culture during the era of Biedermeier. Uprka liked to depict colourful folk costumes of Moravian Slovakia. At that time he experienced the height of his career. In 1902 his style inclined more to decorativism which was seen more as a stagnation in the last phase of his career (1909–1940). In 1902 an exhibition of Slovak and Moravian contemporary artists took place in Hodonín. The exhibition was visited by August Rodin who also met Uprka in Hroznová Lhota. In 1907 Uprka became the president of the newly established Union of Moravian Artists.

Uprka sent this study for a painting called Pilgrimage at St. Anthony, originally owned by Wilhelm Ganzwohl who was a notary from Uherské Hradiště, to the Paris Salon in 1894. It received a medal of honour. This award was the artist’s first foreign success. French critic Alexander wrote this about Uprka’s painting: “…the scene is vibrating, blazing, red, green and white, it shows movement and observation. It is a shame that we don’t have more painters who could see and depict the life in their own country with such a talent as this foreigner shows.”

Uprka created a larger version of this painting for the Topičův salon gallery in 1895 in which he changed a few details. It is now stored in the Moravian Gallery in Brno. These paintings changed Uprka’s career. As was mentioned by Tomáš Vlček, Uprka’s composition of “unkempt” reality was “expressed by smudges which were the most important tool of Uprka’s effort to differ from the period conventions.” Colourful smudges served Uprka as a way to express the identity of the era as well as his place within the contemporary art scene. Vlček suggests that Uprka was not inspired by French Impressionism but by the emotions originating in folk culture in the era of Biedermeier.

Both the study and the final painting represent Uprka’s first depiction of the pilgrimage to St. Anthony, on the hill above Blatnice near Hodonín, which used be a meeting point for women from Moravian Slovakia – as was described by K. B. Mádl in 1901. Young girls used to go there to pray for husbands, while older women went to pray for their bad husbands to change. Men visited the hill not to pray but to drink good wine, which was served in the sheds and tents below the chapel, and also to buy farming tools.

The area in front of the chapel is full of pilgrims and the elaborated composition drags the viewer into the scene. The viewer is also dazzled by the colours of the festive costumes contrasting with the green grass. Uprka was inspired to create paintings depicting the atmosphere of the Blatnice pilgrimages at the end of the 19th century by local priest Mořic Růžička. The pilgrimage, which was attended both by local residents and people from distant villages who were all dressed in beautiful folk costumes, started in June on the Sunday after the day of St. Anthony and continued till the day of St. Peter and Paul. 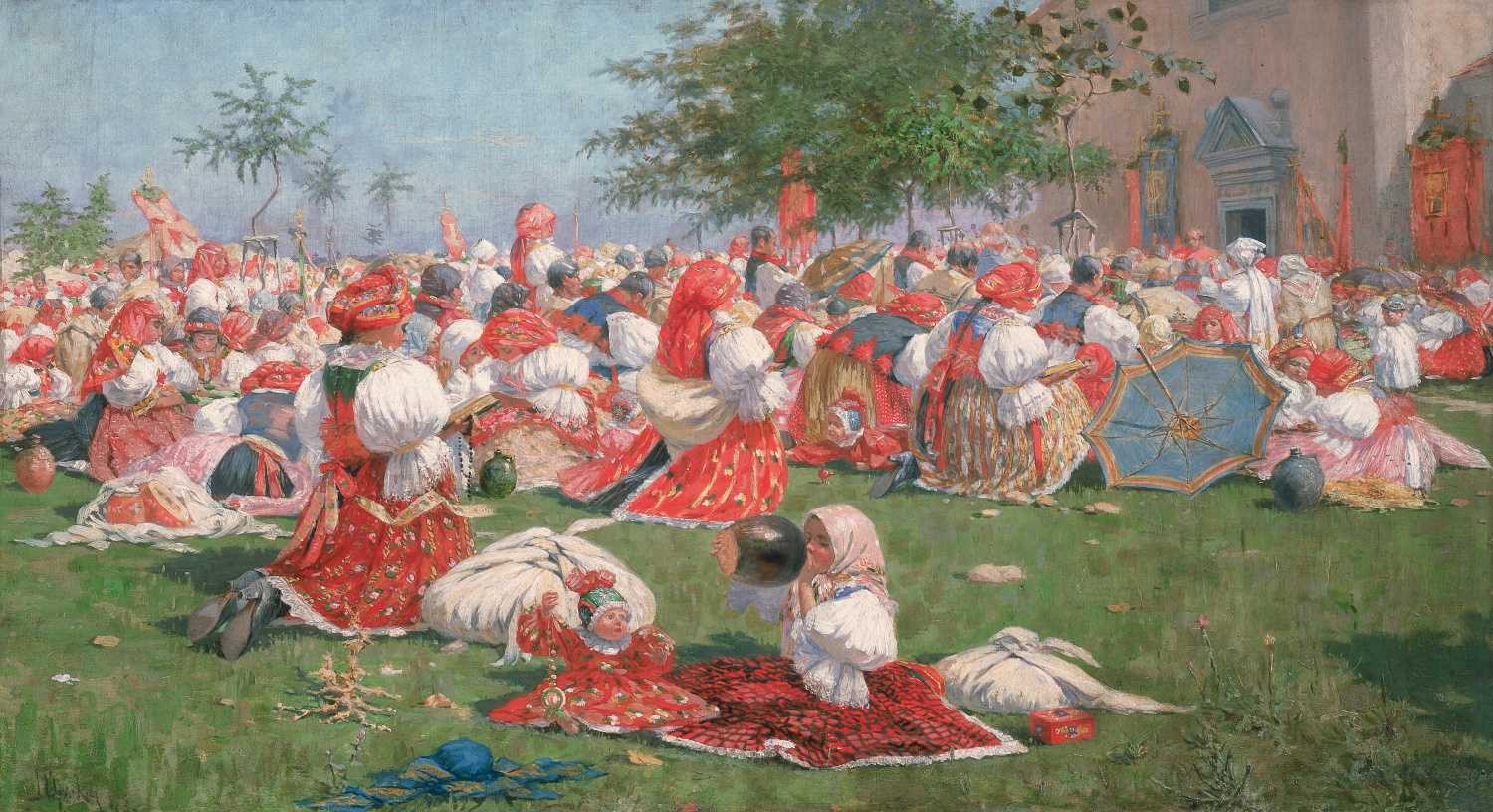