Unterberger was a painter of altarpieces and canvas pictures, decorative paintings and portraits, the most significant member of the branching family of paínters, of south Tyrolean origin, who with his fellow countryman, contemporary and artistic fellow traveller Paul Troger, substantially influenced late Baroque painting in Central Europe and the work of its representatives, graduates of the Academy of Fine Arts in Vienna. His own artistic views were shaped by the foremost Venetian pain-ters of the 18th century, in particular Giovanni Battista Piazzetta, Giovanni Battista Tiepolo and Nicolla Grassi, with whom he became acquainted during his stay in Italy. After 1726 he was active in Bolzano, later in Passau and from 1737 in Vienna, where he became a member of the Academy (1738). He was at its head as the elected Rector in 1751-1754 and 1757-1758. Unterberger´s altarpieces and decorations with profane subject matter were carried out for a number of commissioners in southern Tyrol, in the Danube area, in Upper and Lower Austria, in Hungary and Transylvania. In Moravia he obtained at least three commissions: prior to 1747 he painted the décor in the two ceremonial coaches of the Archbishop of Olomouc, Ferdinand Julius Troyer, in 1750 he took part in the decoration of the ceilings in the summer refectory in the Premonstratensian monastery Hradisko near Olomouc and in 1754-1757 he did three altarpieces for the Piarist church in Kroměříž, which the sculptor  and historiographer Andreas Schweigl called the most beautiful altarpieces in Moravia. In Bohemia he worked in particular for Josef Adam, Count of Schwarzenberk, who commissioned e.g. the altarpiece for the high altar in the parish church in Postoloprty (1751).

Provenance: acquired by Archbishop L. Prečan probably in 1939 from VI. Seidl, an antique dealer in Prostějov, probably from the property of Countess Taxis in Brno. An earlier provenance is unknown.

Both paintings are of superior quality, impressive as works of art and unconventional in iconography. They depict the high moments of Chrisťs Passion, the Crucifixion and the Deposition from the Cross. When first introduced in literature, they were attributed to an unidentified Austrian artist, who did them around the middle of the 18th century under the strong influence of Venetian settecento painting, especially Giovanni Battista Piazzetta. E. A. Šafařiks analysis of the style, however, definitely ruled out the attribution to one of the most notable representatives of this stream in Austrian painting, Paul Troger. At the same time, however, he pointed out the relationship with the works of his colleague, Michelangelo Unterberger, about whom an early biographer said that he had imitated his tutor Piazetta, when "he tried to excel with his sensitive, glowing chiaroscuro."1

This hypothesis could only be convincingly confirmed after a detailed analysis and the subsequent monograph on Unterberger as comparative material had been missing previously. Identical features are found in the two pendant paintings in Olomouc as well as in other works by Michelangelo Unterberger, distinguishing his work of the 1740s and the beginning of the next decade. The perhaps greatest analogues may be seen in the altarpieces done by Unterberger in his peak phase for the cathedral in Brixen (1749), for the parish churches in Bischofstetten (around 1747-1748) and Postoloprty (1751), for the Capuchin church in Scheibbs (around 1750), and the Piarist church in Kroměříž (1754-1755).2 These works and to an even greater degree the oil sketches preceding the Olomouc paintings are linked with the Olomouc pictures by a similar range of colours, the effectively used contrast of the warm brown-red, with a major share of the bolus ground showing through, and the pastel colours, light rose, blue, yellow and green hues used in the well-lit parts and in the flesh tones of the female figures. Another distinc-tive element used repeatedly by the artist is the sketchy, relaxed brushwork in the figures and scenes in the background. As in the picture by Giovanni Battista Piazzetta or Paul Troger, Unterberger makes "a striking effort at plastic modelling", particularly with muscular male nudes, with bold short cuts in the perspective of the figures in the repoussoir. Last but not least, among his distinctive features are the individual types of male and female faces, often captured in profile or half-profile, and certain commonly repeated motifs, e.g. horseback riders.

In connection with the first publication of the paintings, whose original provenance is unfortunately not known, it was considered whether they might be fragments of the Stations of the Cross, of which only two stations survive. Unlike other Viennese artists of this period, e.g. graduates of the Viennese Academy, Johann Wenzel BergI or Caspar Franz Sambach and his son Johann Christian, who repeatedly painted this subject matter, there isnoinformationregardingMichelangelo Unterberger carrying out similar cycles of fourteen pictures. It is much more likely that the pictures are separate companion pieces with the popular Passion theme. This subject appears in Unterbergers altarpieces especially in the 1740s and the early 1750s.3 Typical examples include the pictures of the Crucifixion and Lamentation on the side altars in the parish church in Bischofstetten (around 1747-1748) in Lower Austria, in which the artist concentrated himself on the protagonists of the story. In the first picture, the crucified Jesus is adored at the foot of the Cross by the emotionally moved Mary Magdalene, while in the background riders on horseback are leaving Golgotha, and disappearing behind the low horizon.4 In the Lamentation the weeping Virgin is only accompanied by St John.5

Unlike the quiet, contemplative scenes in Bischofstetten, Unterberger conceived the Olomouc pictures as emotionally urgent, pathetic scenes peopled with a great many figures. In addition to the central scenes of Christs death on the cross and the deposition of the dead body he depicted here several other events linked in the Gospels with the Redeemers death and the burial of his body.6 As in the Gospel story, the Crucifixion takes place in a dark, neutral space, permeated with brown-green mist, from which a strong stream of light proceeds to stress in particular the Crucified with his arms stretched out wide, the group with the Virgin and Mary Magdalene mourning at the Cross; the half-kneeling, half-reclining body is viewed from the back. The slightly diagonally turned cross with the dying Christ, placed between the two crucified criminals, is shifted toward the right-hand edge. The composition is balanced by the figure of the Virgin, standing at the left, fainting from pain and supported by St John and a young woman, who according to some Evangelists was the Virgins sister, Mary of Cleophas. In the foreground, in the role of repoussoir, soldiers cast dice for Christs robe and behind them horseback riders watch the scene. To the right, on the ladder propped up against Christs cross, stand two soldiers preparing a sponge dipped in vinegar and fixed to a rod in order to offer it to the dying Jesus.

No less dramatic is the scene in which four men supervised by Nicodemus and under the watch of a centurion on horseback along with other soldiers deposit the lifeless, corpse-pallid body of Christ, whose legs Mary Magdalene tenderly kisses, on a snow-white piece of linen. In the foreground in a diagonal is placed the striking group of the suffer¬ing, death-weary V. Mary,7 taken care of by St John and a young woman, who already appeared in the previous scene. An interest¬ing iconographic detail is the uprooting of the cross on the left by one of the onlooking soldiers, while the remains of the second cross are seen to the left, next to the group with the reclining V. Mary.

Unterberger, in whose known oeuvre many conscious reflections may be noted of the artists from the periods of the Renaissance and Mannerism, undoubtedly learnt much from other artists in the depiction of these two popular scenes from the New Testament. The circle of these potential inspirations is suggested e.g. by the copy in which the young artist at the beginning of his career, in 1720, recorded the composition of the Deposition by Luca Giordano, originally located in the Venetian church of S. Maria del Pianto (now in Venice, Galleria dellAcademia).8 The inspiration by earlier iconographic and artistic tradition in the Olomouc Deposition is also shown by the motif of the centurion on horseback, with an outstretched right arm, which obviously paraphrases a similar rider on the side wing of the altarpiece triptych by Peter Paul Rubens, The Erection of the Cross (1610-1611; now in the Antwerp cathedral). For the reclined V. Mary one potential model is the much admired and extraordinarily influential fresco by Daniel da Volterra in the church of S. Trinita de Monti (1541) in Rome. 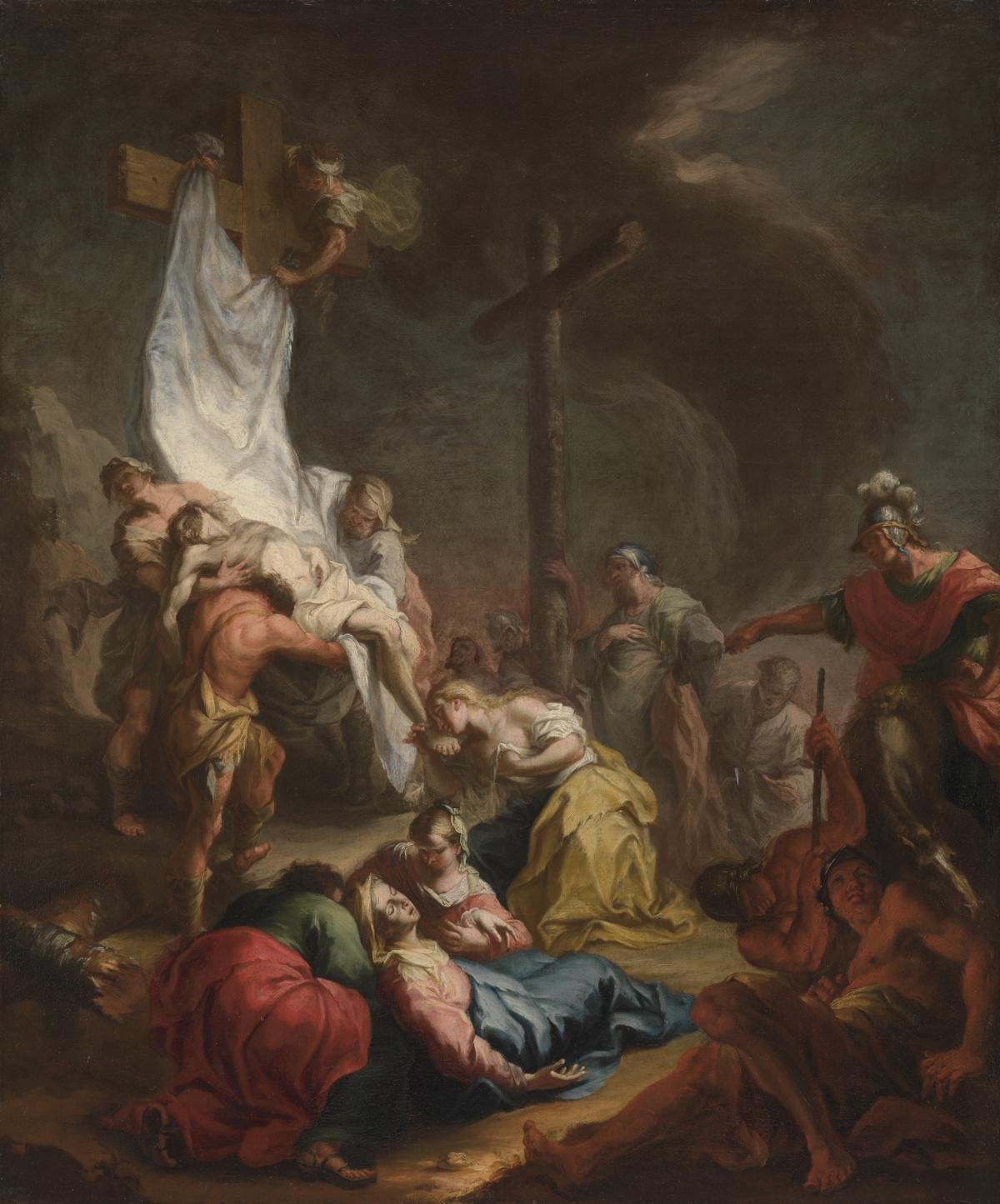 Michelangelo Unterberger
The Deposition, [before 1750] 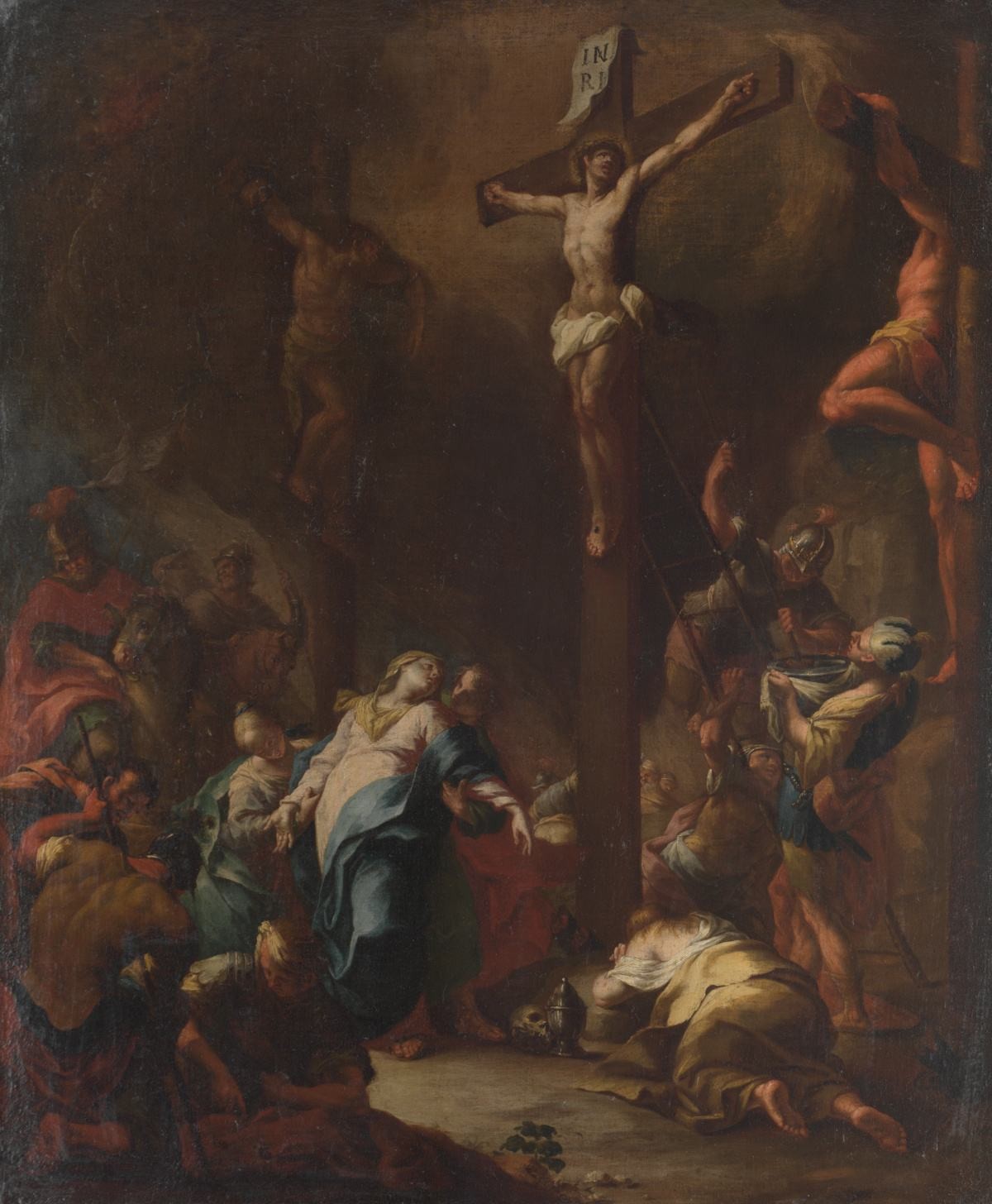 Michelangelo Unterberger
The Crucifixion, [before 1750]
Related