The master of the Augustinian Altar from 1487

The master of the Augustinian Altar from 1487

Virgin and Child with Saint Anne, (Nuremberg), around 1487

The painting depicting St. Anne with Virgin Mary and baby Jesus, was probably originally the centrepiece of the Altar of Saint Anne in an unknown church or chapel, obviously under the direct administration of the Olomouc Bishopric. At present it is impossible to find more about the one who commissioned the painting, it might have been an individual or even St. Annes Confraternity. From the abbreviation on the nimbus of St. Anne "S ANNA ORA P(RO)" it is impossible to determine whether it is meant as singular or plural. The painting is not only of supreme artistic quality, but having elaborated iconography showing the high demands of the customer. St. Anne and Virgin Mary are sitting on a stone bench - a throne in the Garden of Eden characterized by pomegranate, apple and cherry trees. St. Anne is holding a book as the educator of Virgin Mary, passing to Mary a pomegranate, symbol of the Christ and salvation. It is a reference to the moment at which St. Anna greets Virgin Mary saying “benedictus fructus ventris tui Jesus” (blessed is the fruit of thy womb, Jesus). At the same time, the apple is a reference to Virgin Mary as the "Second Eve" who, as the mother of Christ - the Saviour contributed to the elimination of the original sin. Virgin Mary is depicted in a humble gesture of prayer, but with a crown on her head promoting her to the Queen of Heaven. Jesus with a nimbus containing a cross, an indication of his crucifixion and the salvation of mankind, is sitting in the centre and the angels are holding the crown of the Ruler of the world above his head. The plants sprouting at the foreground of the picture are symbolic too, e.g. strawberry with its trifoliolate leaves is referring to the Holy Trinity. The author of the painting is the Master of the Augustinian Altar, a painter from Nuremberg, thus called after his main work, the Altar of St. Vitus made in 1487 for the Augustinian church in Nuremberg (Nuremberg, Germanisches Nationalmuseum). His identity remains unclear, even though some researchers are pointing out to a possible connection with talented painter and graphic artist Wilhelm Pleydenwurff (1460–1494), step son and colleague of Duerers teacher Michael Wolgemut. 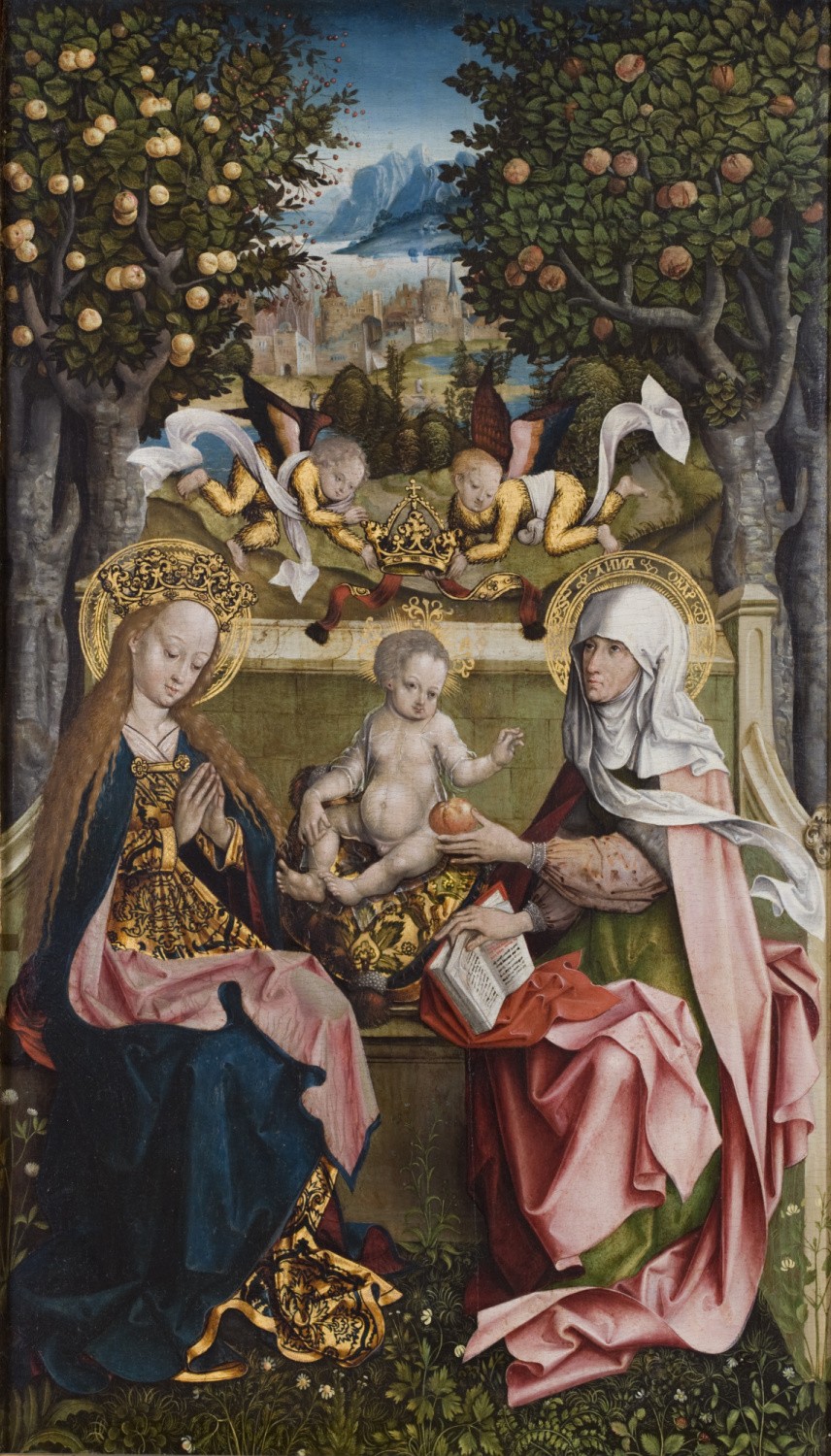 Virgin and Child with Saint Anne, (Nuremberg), around 1487
Related