In the years 1885–1887, Špillar studied at the Academy of Art, Architecture and Design in Prague under František Ženíšek and Jakub Schikaneder and, from 1887 to 1892, at the Academy of Fine Arts under Maxmilian Pirner. He lived in his native region Pošumaví, first in Postřekov, later in Pec pod Čerchovem, where he studied local villagers and depicted scenes from their lives and local history, as well as landscape. He is known as the painter of Chodsko, a historic border area. In 1897–1899, he also painted fairy-tale scenes. In 1900, he went to study painting in Italy (Florence, Livorno and Fiesole). His works are typical of a naturalistic, even documentary approach with sentimentalism accompanied by slightly idealized features characteristic to his time. From 1904, Špillar suffered from a mental illness and spent the rest of his life in a mental institution.

This painting, with a sarcastic, even cynical humour, represents Špillar’s interest in fairy-tale motifs. He was inspired by Pirner, Schwaigr, Preisler and Panuška as well as his own childhood memories, fairy tales and legends. He also loved children. Špillar’s paintings of the mythical world of fairies, undines, water goblins and heroes on winged horses were exhibited at Špillar’s first comprehensive exhibition in the Topičův salon for the first time at the beginning of 1899. These paintings differ from Špillar’s other works not only in theme, but also in his brushwork, influenced solely by the painter’s fantasy and imagination. K. D. Mráz, who emphasised the caricature-like tone of the painting, described it briefly in a catalogue issued on the occasion of the exhibition of Špillar’s paintings from Chodsko and Italy which took place in Prague in 1901. The painting is also mentioned by Prokop Toman (1947) under the name Water Nymphs. This name is also used by the museum.

The tragicomic story depicted in this sketch-like painting can be interpreted as follows. A grandfather and grandson brag about two water, or rather wood, nymphs in front of their neighbours. They have captured them somewhere in the woods, tied them up and locked them up in the shed. Now the whole village is looking at the nymphs and laughing. The mythical world of the ashen water nymphs contrasts with the real world of the villagers in colourful folk costumes, even though their worlds co-existed in the countryside from way back. In this way, the picture resembles Beneš Knüpfer’s painting Fauns Running Away from a Car (1905), he having also placed the real and mythical worlds next to each other. In this clash of modern civilisation with mythical creatures, he aptly depicted the end of the latter. Špillar’s painting presents a similar tension. What will happen next? What will the people do with the nymphs? Does this mean the end of the fairy-tale world, existing for centuries in the imaginations of the country people? 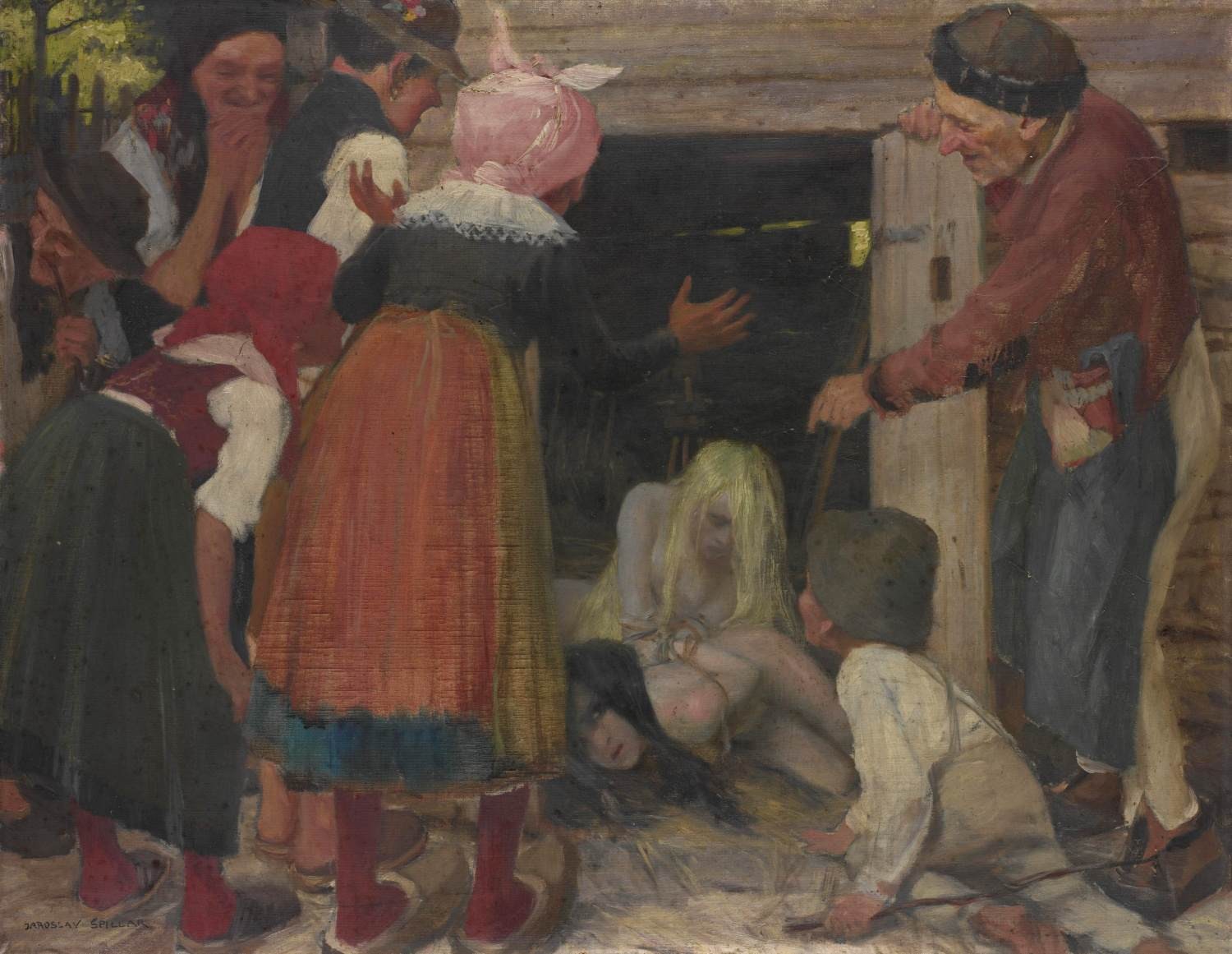