Antonín Slavíček was one of the leading personalities of the generation maturing at the start of the 20th century. During his studies at the gymnasium he was already taking private painting classes with Emil Lauffer. At the end of 1886 and start of 1887 he lived in Munich, where he took private classes to prepare for studies at the Academy there, but likely he did not pass the entrance examinations. He returned home an in 1887 entered the just opened landscape school of Julius Mařák at the Prague Academy. He soon interrupted his studies, continuing only in autumn of 1889. In 1891, together with Mařák’s students, he first exhibited his work in public during the Jubilee (or, General Land Centennial) Exhibition, where he first saw the work of Antonín Chittussi, which had a marked influence on his whole generation. In the same year he again interrupted his studies, returning to them in 1894–1899. With his fellow students at the atelier of Prof. Mařák, he took trips to paint in the open air in the surroundings of Prague and to Bechyně – the favourite location being Okoř. In 1895 he married Bohumila Brynychová. In 1898 he became a member of the Mánes Union of Fine Artists. After the death of Julius Mařák, he took over the landscape atelier at the Academy, but shortly after in the academic year 1899/1900, because his application for professorship was denied, the atelier was closed. In 1900 he received a bronze medal at the World’s Fair in Paris. Starting in 1902, he began to work on new subjects, aimed at capturing the true expression of authentic Czech landscapes. One of his discoveries was area around Kameničky, where he regularly returned to paint in the years 1903–1908. In 1907 he received a Charlotte Piepenhagen stipend for landscape painting and left for Paris, together with Stanislav Lolek and Jan Minařík. In 1908 he painted monumental panoramic views of Prague for an exhibition arranged by the Prague Chamber of Trade and Commerce. When he learned that after having a stroke that he would never return to normality, he took his own life.

The painting In the Garden (From Okoř) is connected with summer stays in Okoř, a picturesque valley not far from Prague. The painter regularly travelled there together with students of Julius Mařák in the years 1897–1901. Slavíček is of the generation of Czech painters whose depiction of nature was approached as a symbolic mirroring of the inner reflections of man. Happy experiences in the family circle (after the birth of his daughter) are reflected in his works, as is the inspiration taken from the work of his fellow student, the painter Antonín Hudeček. Closed spaces of melancholic autumn landscapes (mainly forest interiors) gave way to wide open compositions of landscape segments, depicted in spring or summer in full sunlight.

At the time (most likely the summer of 1898) when his work underwent radical transformations, Slavíček made this Olomouc painting in Okoř, which stands at the beginning of his new direction. Slavíček adopted a new painting technique and new colour scale for his new subjects. As Jan Tomeš (in 1966 and again in 1973) said about the painting From Okoř, “with its provocative blue-green chord – perhaps he found his new path here.” In addition to the expressive colouration, the work is marked by energetic brushstrokes, which have almost the character of the pointillist method of applying blotches of paint. The painter extended his brushstrokes, in doing so intentionally avoiding details in order to capture in one glance and intensify that which is most essential: the atmosphere of a sunny summer day. In the garden – or rather in the field or yard behind the barn – we can only recognise with certainty the tall sunflowers with their characteristic yellow blossoms. With respect to the fact that in this period he kept raising the line of the horizon, the landscape scene here too is bordered only by the thin line of sky. 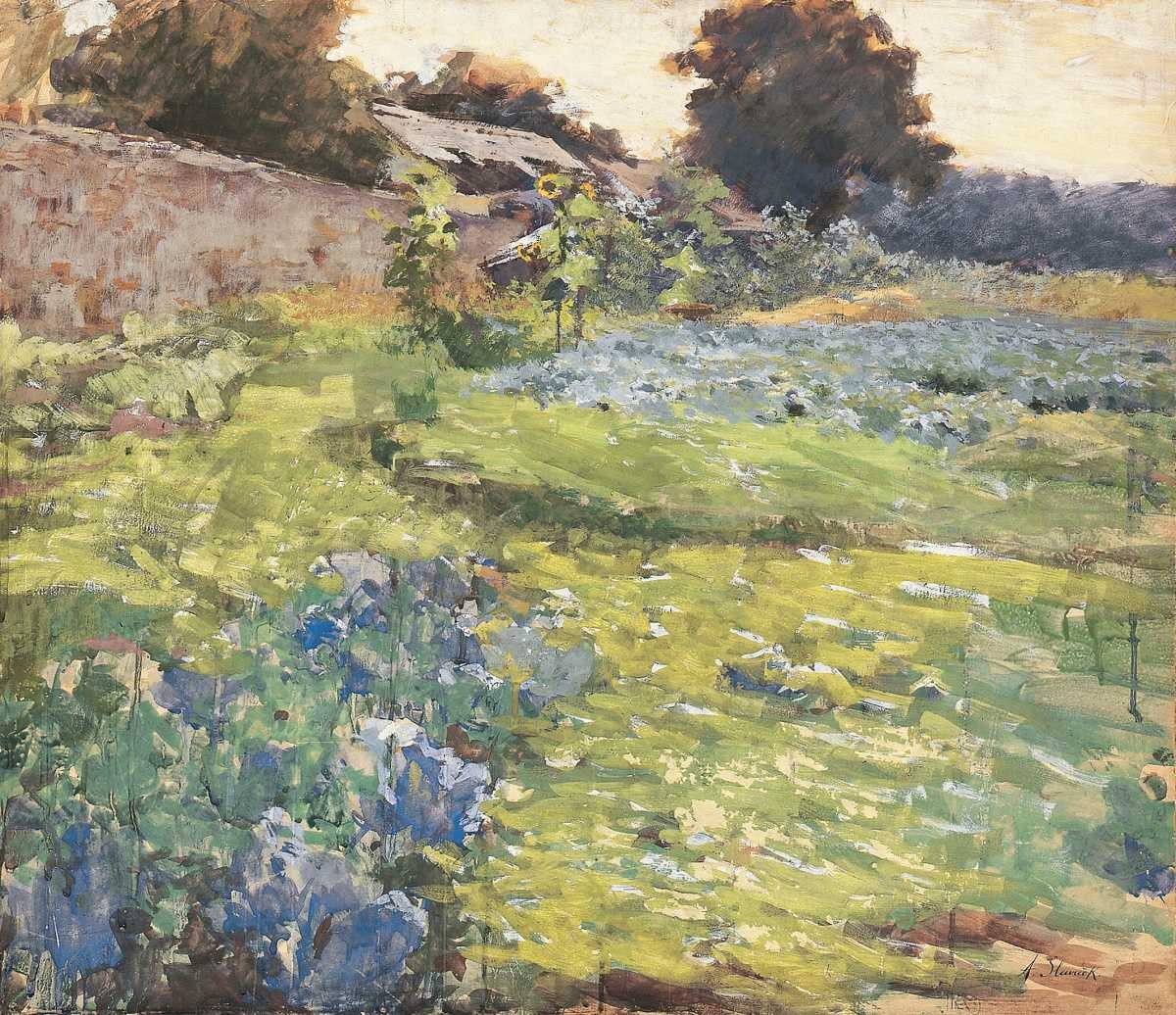