He entered the Vienna Academy as a fourteen-year-old, studying under Hubert Maurer. His fellow students were Johann Friedrich Overbeck, Joseph Sutter and Julius Veit Hans Schnorr von Carolsfeld. In 1812 he went to Venice to see his married sister, where he had the opportunity to copy old masters. His patron, Archbishop Franz Xaver Salm-Reifferscheidt, made possible a further study trip to Italy in the years 1814–1816. During that time he cooperated and lived with the group of Nazarene movement painters from the Brotherhood of St Luke (a circle concentrated around J. F. Overbeck) in the monastery of Sant’Isidoro in Rome. He became a member of the group in October 1815. In 1816 he returned to Austria, to Klagenfurt. During 1819/1820 he moved to Vienna. There he received praise for the Vargemont Votive Painting and St Cecilia Playing the Organ. After a brief stay in Klagenfurt he left for his third trip to Italy (1820–1821) due to serious illness. In Rome he painted the first version of his chef-d’oeuvre The Death of St Cecilia. He died young of tuberculosis.

The Olomouc painting St Cecilia Playing the Organ is likely a ricordo of Scheffer’s masterpiece; the original was part of the collection of Albert, Duke of Teschen, soon becoming the property of Archduke Karl Ludwig, and subsequently the property of Archduke Albrecht Friedrich, Duke of Teschen – where it was seen in 1875 by Albert Ilg – but its whereabouts today are unknown. Scheffer’s original, done in slightly larger than life-size, was exhibited together with his St Ludovica and Self-Portrait at the annual Academy exhibition in April 1820, at which the work, on which he laboured for an entire year, gathered deserved admiration and won him a big reputation. St Cecilia Playing the Organ captivated the public so much that it was still remembered at the exhibition in 1822. He received three hundred gold ducats from Albert, Duke of Teschen, for the painting, which allowed him to make his second study trip to Rome.

Scheffer placed his scene into a Renaissance arcade with a view onto a southern landscape with a hilly region on the horizon. The attempt at a balanced harmonic composition is evident from the chosen total of three angels. The patron saint of music, St Cecilia, turns her view away from playing on the organ to the direction of the singing angels. This scene is likely from Scheffer’s studies during his stay in Rome in 1814–1816, where he studied and copied works by Francesco Raibolini called Francia, Fra Bartolomeo, and Mariotto Albertinelli. The works of these masters and the still more distinct works of Raphael and Perugino, copies of which are found in Scheffer’s sketchbooks, became the formal starting point for Scheffer’s entire oeuvre and certainly for this painting, which still does not yet show the brilliant individuality of his Death of Cecilia (1821); though it anticipates it. The artist’s inspiration taken from Italian Renaissance painting, exactly according to the programme of the Nazarene movement, is especially apparent in the expressive colouration of the locality and the depiction of the sweet faces of Cecilia and the angels, whose likenesses are at the same time unmistakeable.

Regarding St Cecilia Playing the Organ (in addition to the supplementary painting record from the archbishop’s collection), in the Museum of Natural History, Vienna, there is a still preserved partial study of the figure of the saint. On this sketch the saint’s head is garlanded by a laurel wreath instead of a halo. Two other studies from Heymann’s collection were exhibited in the Vienna Belvedere in 1927. And an engraving was made after the painting, created by Carl Rahl in 1837. 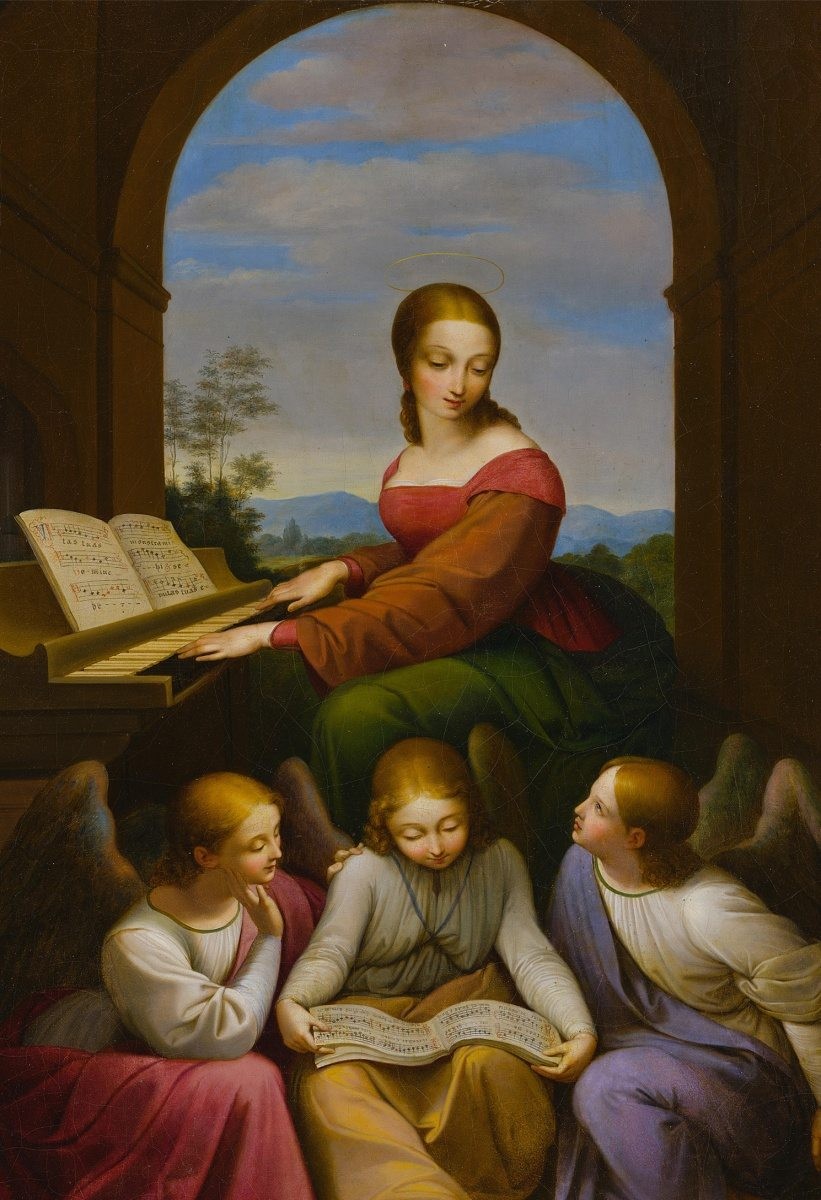