During the years 1872–1874 he studied at the Academy in Prague with Josef Matyáš Trenkwald, whom he followed, together with Josef Tulka, František Ženíšek and other fellow students, to Vienna, where he continued his studies with him at the Academy there in the years 1875–1879. In 1878 he made a study trip to Munich, and a year later took part in a contest for the curtain and frieze over the proscenium of the National Theatre in Prague. In 1883 he travelled through Italy. He lived primarily in Vienna and worked there mainly as an illustrator until 1887, when he was offered a teaching position at the newly equipped atelier of genre painting at the Prague Academy, which soon achieved great fame. His students included V. Bartoněk, L. Marold, F. Hudeček, J. Uprka, F. Bílek, J. Špillar and many more. In 1896, he was named full professor and in 1898 he became the school’s rector, and was also a member of the newly founded Vienna Secession (the Union of Austrian Artists), taking part in their first two exhibitions. Fearing unfavourable criticism, he did not send his works to the annual exhibitions of the Krasoumná jednota (Fine Arts Unit of Bohemia). Pirner’s painting and illustration work is characteristic for its literary and philosophical orientation. In addition to allegories, myths, legends and fairy tales, he also depicted religious themes. He built upon salon painting, but soon turned to naturalism and decadent stylisation, later to Neo-romanticism, Symbolism and Art Nouveau.

Maxmilián Pirner was known for contemplative creative approach. The composition of his works is very carefully conceived. From the 1890s moreover, he continuously returned to his earlier works, elaborating them until their definitive final form. Technical analysis carried out by the restorer confirms that the Olomouc canvas The Procession of Life is one of those Pirner reworked. He created the first, more dramatically conceived version, richer in terms of figures and décor, in 1898, and then significantly improved the composition, finishing it some twenty years later. The subject of the Temptation of St Anthony is one he concerned himself with often, elaborating it in several forms during various periods in his artistic life. At first he depicted the erotically charged moments of Anthony’s temptation, when the devil took the form of a woman, imitating her feminine wiles in order to seduce him. But the devil continued, even after his defeat. If could not deceive Anthony’s heart with lust, then he would disguise himself and take the forms for example of “women, beasts of prey, serpents, giants and warring hosts”, later again he adopted the form of animals, “whose torsos resembled men, but had the loins and legs of asses”. These and other colourful depictions of demons in Athanasius’s Life of Antony the Great (357) gave Pirner inspiration for the realisation of the improved Olomouc painting, which is probably the culmination of his creative efforts at depicting the subject of Anthony’s temptation. Our piece builds on work along thematic lines turning to fairy tale, mythological and legendary material. The artist’s inclination for fantastic motifs was very often connected to literary inspiration – as if he sought refuge from the real world in mythical characters from the imaginary world.

In the Olomouc painting we also find Pirner’s characteristic conflict between two opposite worlds: the wild, swirling rhythm of the demons’ bodies in the most bizarre forms here is in sharp contrast to the calm anchorite. The demonic frolicking is like smoke. When the fire to nourish them is missing, they disperse. They treat Anthony, and people in general, the way they see us. They will reveal themselves as phantoms according to the thoughts they find in us. If St Anthony turns to Jesus, it is not in the power of the devil to overcome him, which is likely why the painter depicted the nagging world of demons at an appropriate distance from his hermitage. 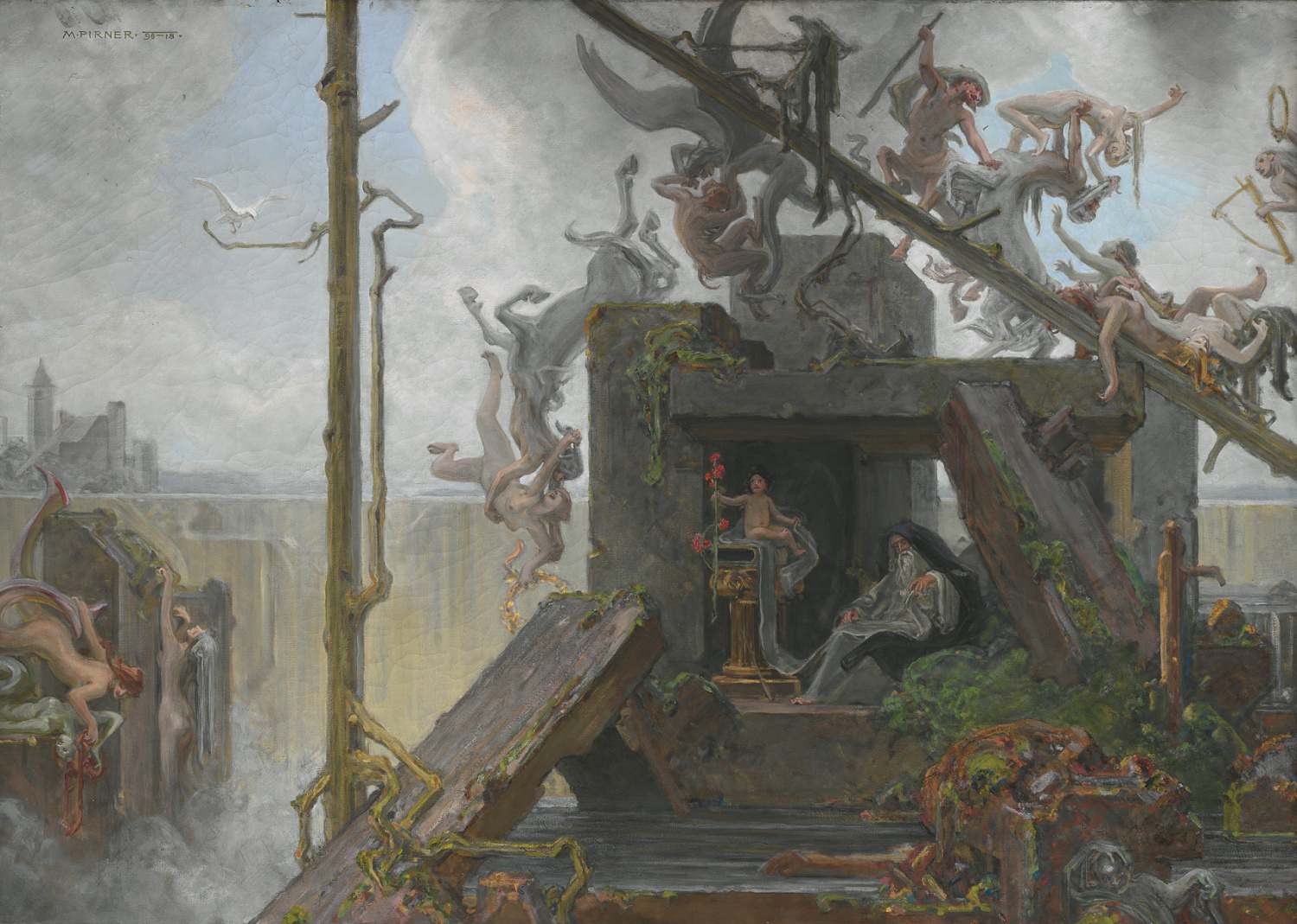 Maxmilián Pirner
The Procession of Life (The Temptation of St Anthony), 1898–1918
Related