A landscape painter and symbolist poet. During the years 1889–1892 he studied at the Prague Academy in the landscape atelier of Julius Mařák. In 1894 he went to the Vienna Academy to perfect his landscape painting under Eduard Peithner von Lichtenfels. His more personal work began after his stay in Vienna. At that time his feel for mood and colour gained depth. The painter freed up his brush style, augmented his palette with accents of yellow, purple, green, red and orange, and elaborated his own personal form of Impressionism. He lived for a time in Nová Paka, whence came the title of his second collection of poetry, Dojmy z Paky (Impressions of Paka, 1897), then in Šitbořice and Klobouky u Brna, finally settling in Luhačovice in 1906, where he gathered about him an artistic community and founded a tradition of regular art exhibitions. He also joined the group of artists around Joža Uprka, and together with them founded the Moravian Artists Society (Sdružení výtvarných umělců moravských). He fell terminally ill and moved to Brno at the end of his life.

Before František Pečinka came to Luhačovice to permanently reside in 1906, he spent some time in Šitbořice and Klobouky u Brna. He painted the local landscape featuring the last, and at the same time the oldest, of the six windmills there. This two-storey wooden mill of the German type, standing on the southern hill over Klobouky, is seen in the Olomouc painting. It was erected in 1748, and originally belonged to the Zábrdovice monastery, and was the only one of the Klobouky windmills to survive into the 20th century. The mill before us in Pečinka’s painting is expressed as a sad, lonely witness of times past. In an almost single colour tone it blends into the bare hill. The grey monochrome, contrasting with the partly overcast sky, is interrupted by delicate accents of brown, green, and yellow. Colours play a role not only in František Pečinka’s paintings, but also in his poetic works, where they are the bearers of feelings and emotions. In addition to the expressively coloured landscapes more common in the artist’s paintings, one also finds (and in the poetry as well) landscapes done in pallid, grey, ashen and steely hues – normally associated with themes of sadness, longing, melancholy, angst, abandonment, and loneliness. 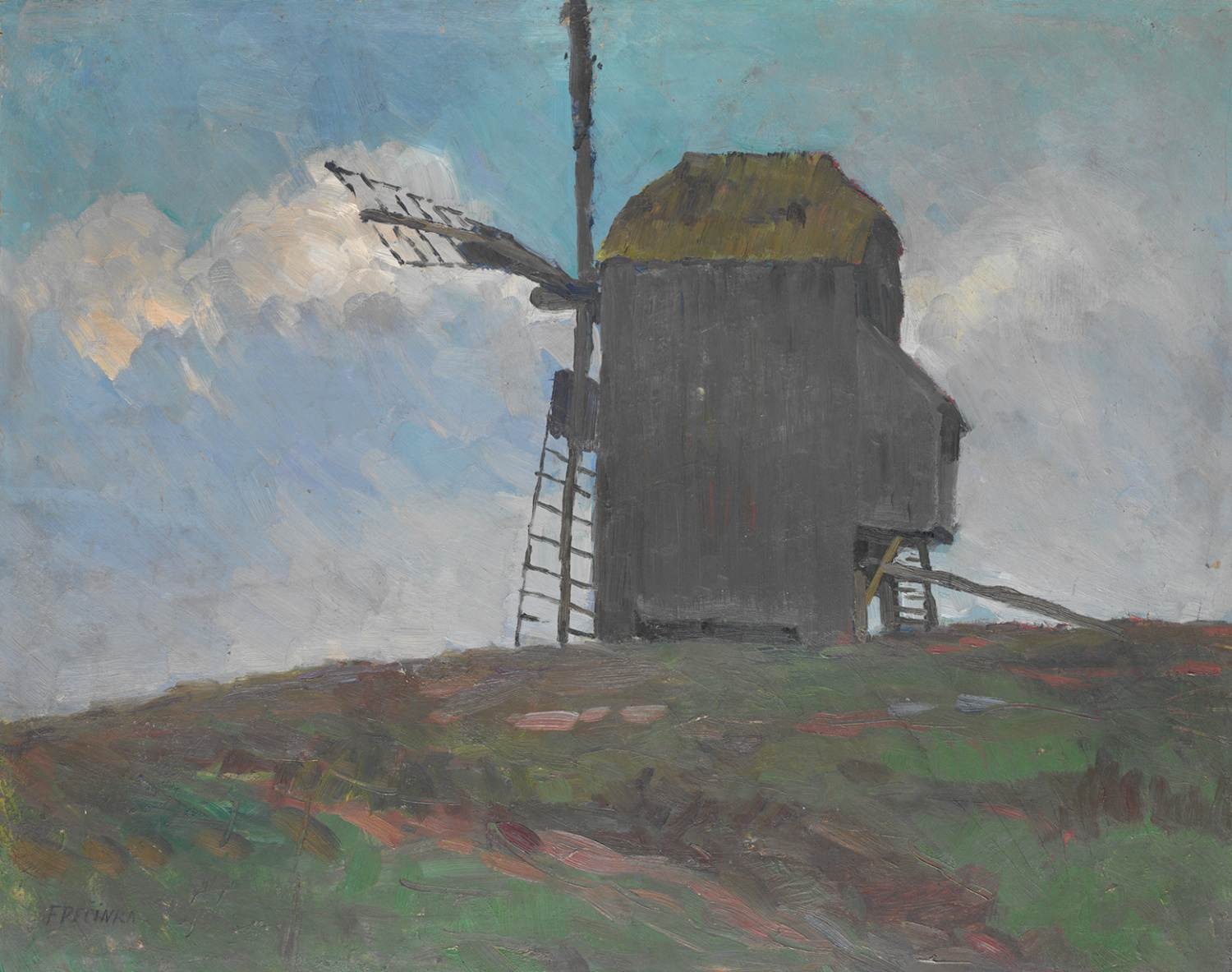