Preparatory Meeting for the Beatification of Jan Sarkander, 1855

Muhr came from a Hungarian Jewish family that lived in Berlin from the mid-eighteenth century. His father, Abraham, was a private teacher in Latvia and Galicia, his uncle Joseph was the head of the Jewish community in Berlin. At the young age of thirteen, Muhr was admitted to the Royal Academy in Berlin, where he studied painting. He continued his studies at the Academy in Munich in 1838. He earned money during his studies by creating small paintings (portraits and genre paintings). He was an assistant of painter Wilhelm von Kaulbach, and, from 1847 to 1854, he cooperated with M. Echter on the creation of wall paintings based on Kaulbach’s drafts in the Neues Museum in Berlin. From 1852 to 1858, he worked in Rome where he created mainly portraits and historical paintings. In 1858 he once again visited Berlin and then he permanently settled in Munich. He converted to Christianity in 1860 and was briefly married to Mathilde von Colomb, a Protestant. He painted mainly genre and religious scenes, portraits and landscapes.

This valued and monumental painting, Hyacinth Holland called Preaching in Sistine Chapel, was painted for a canon of the Olomouc chapter and later the Capitular Dean Robert Maria Count Lichnowsky (1822–1879). The painting was created on the occasion of the beginning of the final preparations of the beatification of Jan Sarkander (1573–1620) and probably depicts the preparatory meeting for the beatification which took place in Rome on 11th September 1855. There was a large gathering of cardinals with then Pope Pius IX in the Sistine Chapel. The fourth man in the row next to the wildly gesticulating Dominican speaker could be Francesco Liverani, canon of the Lateran basilica in Rome. It is suggested by his features as well as the choral clothes of the canons of papal basilicas (surplice with mantelletta) which the figure is wearing. Archbishop Friedrich Fürstenberg appointed Liverani a postulator.1 He took this role very seriously and thoroughly saw to the finishing of the beatification. Artistically, the painting is done in the style of historical realism and corresponds with late Munich Romanticism. The whole event is depicted as a theatre scene. The colours of the painting are hard to assess because of the significantly darkened and yellowed varnish. A restoration would be welcomed in the future.

The painting serves as proof that the Olomouc clergy was expecting a successful completion of the beatification process, which started at the beginning of the eighteenth century. As early as 1715, Olomouc bishop Wolfgang Hanibal Schrattenbach asked the Roman Congregation of Rites to start the beatification. Ferdinand Julius Troyer followed in his attempts but his death, as well as the death of Pope Benedict XIV, interrupted the process for a long time. Later, the emperor’s brother and Olomouc archbishop Archduke Rudolf Jan started to engage in this matter. After his death his successor Ferdinand Maria Count Chotek continued with his work until he tragically died in 1836. Only after the efforts of Archbishop Friedrich Prince Fürstenberg was the process successfully finished. Pope Pius IX beatified Jan Sarkander2 on 11th September 1859. 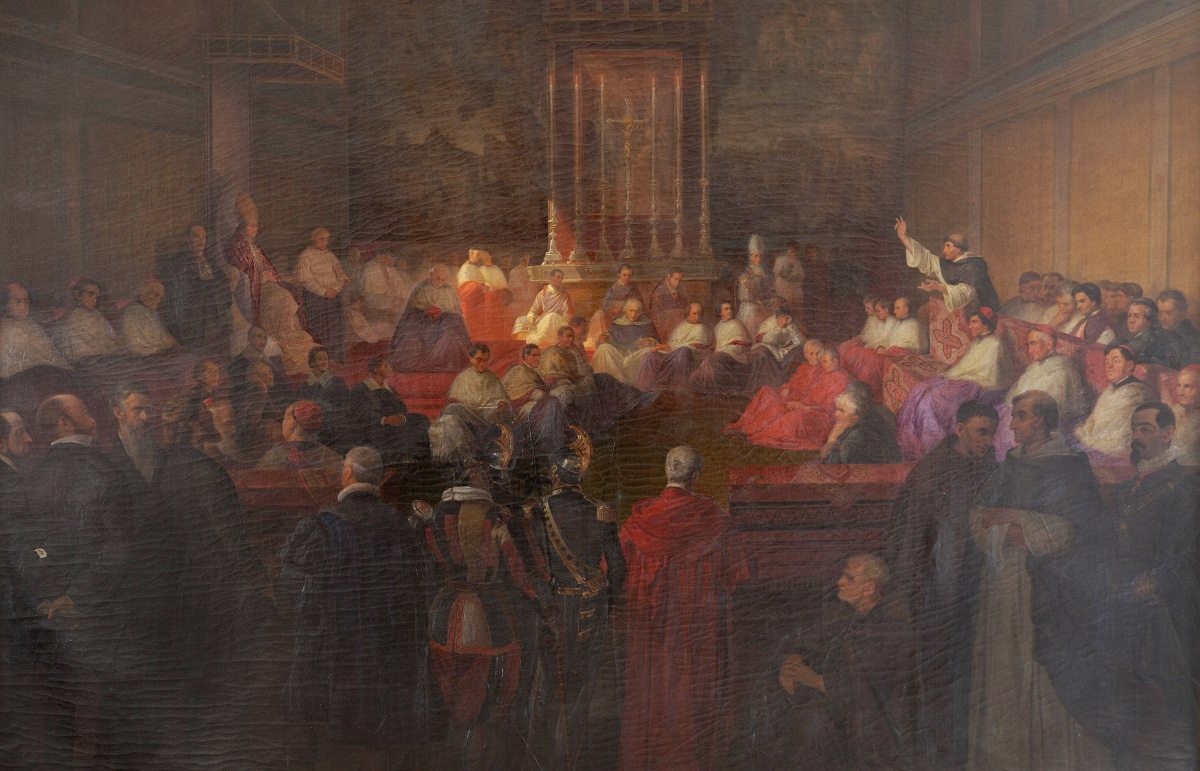