Gabriel Cornelius Max was the son of the sculptor Josef Calasanza Max and a nephew of the sculptor Emanuel Max. He started his painting career in 1858 with three-year studies at the Prague Academy of Fine Arts (Eduard Engert), then he left for the Academy of Fine Arts in Vienna (Christian Ruben, Carl Wurzinger) and concluded his studies in 1867 under Piloty in Munich, where he settled after a trip to Paris and a short stay in Vienna. Although he rejected the romantic historicism of the Vienna Academy and the historical painting of Piloty’s school, he became professor of historical painting at the Munich Academy of Fine Arts in 1879. He left after four years. He inclined to spirituality and mysticism, but also studied Darwinism. He was interested in parapsychology, somnambulism and hypnosis and he joined the Theosophical Society. His interests also included natural sciences, ethnology and anthropology. He owned a large collection of finds, which he bequeathed to the Reiss-Engelorn-Museen in Mannheim.

During his summer stay in Ammerland by Lake Starnberg, he was surrounded by monkeys, that inspired him to allegorical-mystical images. Max was always fascinated by music. He created many pictures while listening to Beethoven or Liszt. He also made illustrations for some works of German classics. His exalted aestheticism matched his lifestyle and social status. In 1900, he was knighted. He took part in exhibitions in the gallery of M. Lehman and exhibitions of the Fine Arts Association.

Madonna and Child depicts the Madonna sitting in a pink robe, inclining her head towards the half-naked child. The painter borrowed from the Dutch masters of the 16th century the distinctive canopy of the Queen of Heaven and Christ the King. The exquisite Olomouc painting is a replica of his more spectacular painting created in a somewhat more moving and poetic form, which was sold to London. As it was conceived as a Marian votive picture, it was illusively captured together with the frame, lighted candles and votive gifts.

The frontal composition of this work comes from the canon of Hodegetria, according to which the Madonna holds the child on her left hand and points to it with her right hand. Thus the Mother of God encourages the journey towards Christ, being „the guide on the road.” Pilgrims used to stop at Hodegetria before a dangerous journey to beg for her blessing to reach the end of their journey safely. In the moral sense, the finding of the right path does not exclude occasional straying. If it occurs, it is necessary to start again. According to the Holy Scripture, it is a „retreat”, a search, figuratively a correction of the wrong path. This was also of importance for Max, as the journey for art is arduous, with straying and doubts about the correctness of the chosen direction. In addition, modern individualism leading us astray builds a wall of seemingly intractable problems.

In a religious sense, the end of a journey is shown in the background of the painting: it is a Christian church, the House of God. In its search one finds support in Mary’s subtle gesture meaning „Servus Marie numquam perire“ (The servant of Mary will never lose his way). Although she does not point at the Child of God like Hodegetria, she has put a hand on him as if saying: „Do whatever he tells you to do.“

The model of Max’s Madonna, unlike many other of his works, is distanced from the metaphysical depth and intrinsic mood. It is not just the fact that Max in the late 1880s inclined to naturalism. The Madonna on his painting seems unaware of her mission – she takes it as a matter of fact. Then you can accept the fact that it is a portrait conceived in a completely profane manner. This is related to the passive and indifferent look, characteristic for a model after a long sitting. Neither does the child appear to be the King of the World, but rather a son in the arms of a simple mother. It resembles a scene from family life. Instead of the expected lifted right hand of Christ the King, in the Olomouc painting his hand is hidden under the white cloth in which he is wrapped. This is to emphasise the intimacy of the mother and child relationship.

At the time when Max created Madonna and Child, his family life was far from ideal. He divorced his wife Emma, a daughter of the Bavarian staff surgeon Kitzinger in 1893. The painting therefore comes from the time when they had already been alienated. The model was his future second wife, Ernestine Harlander.

While Max was attracted by psychologically extreme states of oversensitive individuals, especially beautiful women, it is not the case of his Madonna with an almost indifferent look. We can hardly speak of her beauty, rather the contrary. The Madonna with the tone of the complexion in greyish reflexes has a completely common look. Even though, like in other cases, it is a brilliant painting with gentle shades, it received extraordinary acclaim at its time resulting apparently from its religious message. In 1890, Nicolas Mann counted twelve votive paintings of the Madonna by Max.

Today, there is a growing interest in Max’s works deserving attention also with respect to the hidden meanings concealed in the technically exquisite paintings by this highly sensitive and thoughtful artist. 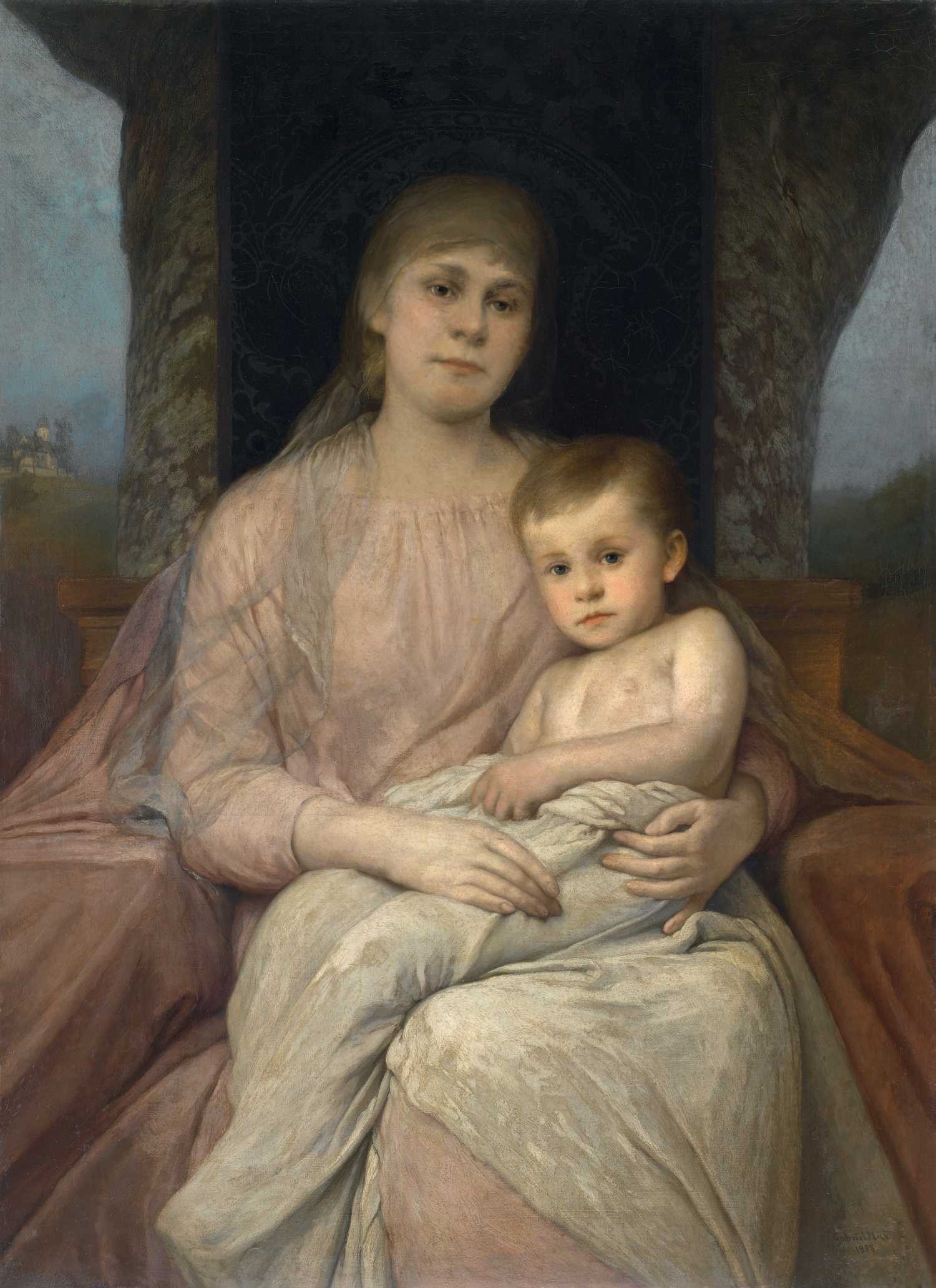