Marold was a prominent Czech illustrator and verismo painter who was highly respected during his short life. However, the next generation of modern artists strongly denounced Marold’s works. The monumental panorama Battle of Lipany became a symbol of kitsch until the last quarter of the 20th century when historicism and naturalism were rehabilitated and Art Nouveau started to be admired as a commercially successful style. Marold started to study at the Prague Academy when he was sixteen but was expelled a year later (1881) for disobedience and because he made a caricature of Rector A. Lhota. Similarly to A. Mucha, Marold also continued at the Munich Academy. He also sold drawings to Braun und Schneider publishing house. After his return to Prague, he briefly studied at the Academy under M. Pirner (1887) but then he transferred to the School of Applied Arts and became a member and editor of the Mánes Union of Fine Arts. Even though he was successful (for example, the painting The Egg Market), he decided to move to Paris. He was very interested in illustration and his works were highly respected. He was considered to be better than some well-known illustrators, such as Jules-Descartes Ferat (1829–1889). Marold’s main asset was his ability to faithfully capture the “elusive” topic: reality. Marold received a golden medal at the International Exhibition in Munich (1892) and was praised at an exhibition in Berlin. He became a member of the Czech Academy of Science and Art and received a medal for his aquarelle paintings (1895). He returned to Prague for a while, where he created the highly regarded poster Our House in Redevelopment and was commissioned to create a painting for the Exhibition of Architecture and Engineering (1898). The painting was the largest painting in the Czech lands, the above mentioned panorama of Battle of Lipany. Unfortunately, Marold died unexpectedly before the planned exhibition in 1899.

This gloomy, study-like painting depicts a funeral procession during a rainy day. The viewers can almost feel the haste, the need to be done with this tragic moment. The sadness is deepened by the rainy weather. The last journey is watched by random onlookers whose attention is drawn by an unusual number of priests.

Marold was able to capture the atmosphere and still present an airy and compositionally compact painting which is typical especially for his aquarelle and guache paintings. Paintings done in oil or tempera are usually more effective when they are done in the form of an unfinished study. This unusually fresh painting is done in monochrome colours, which remind us of a famous professor from Munich Academy, Nikolaus Gysis.

Even though we do not know any circumstances regarding the origin of this work, traditionally called Funeral at the Seine Riverbank, according to the text on the painting – “In Remembrance” – we can assume that Marold knew the deceased person. According to Jana Brabcová Marold, he “always avoided the depiction of tragic moments…”. Marold’s desired authenticity and effort to capture a fleeting moment required a reportage technique. It is obvious that he used a photograph which was, at that time, openly utilized by naturalism-oriented painters, including Hynais and Brožík.

It is not easy to identify whose funeral is depicted. At that time, no Czech artists died in Paris. The only prominent figure that Marold could have known and who died in Paris during winter was Alexander Cabanel, promoter of academic eclecticism, who died on 23 January 1889. However, the rather modest scene does not correspond with the funeral of a great academic artist. Besides, Marold came to Paris in summer during the World’s Fair. It is also improbable that Marold would have become friends with Jules Dupré, one of the Barbizon artists, who died on 9 October. In 1889 a member of the royal family Crown Prince Rudolf committed suicide, but, as he was not an artist, it is not possible to link his funeral with Marold’s painting.

The text In Remembrance leads us back to the Czech lands, more precisely to Moravia and Olomouc where this Marold’s painting was discovered. Even this “town of priests” has not helped us solve the mystery. We should focus more on the fact that there are an unusual number of prelates in the picture. Could it be the funeral of a cleric? In Olomouc the dean of the theological faculty, Mons. Prof. Th.D. Josef David (1827–1889) died on 3 April 1889. Maybe Marold was friends with some members of David’s family and they commissioned a painting of the funeral. There are no other suggestions of whose funeral it could have been. 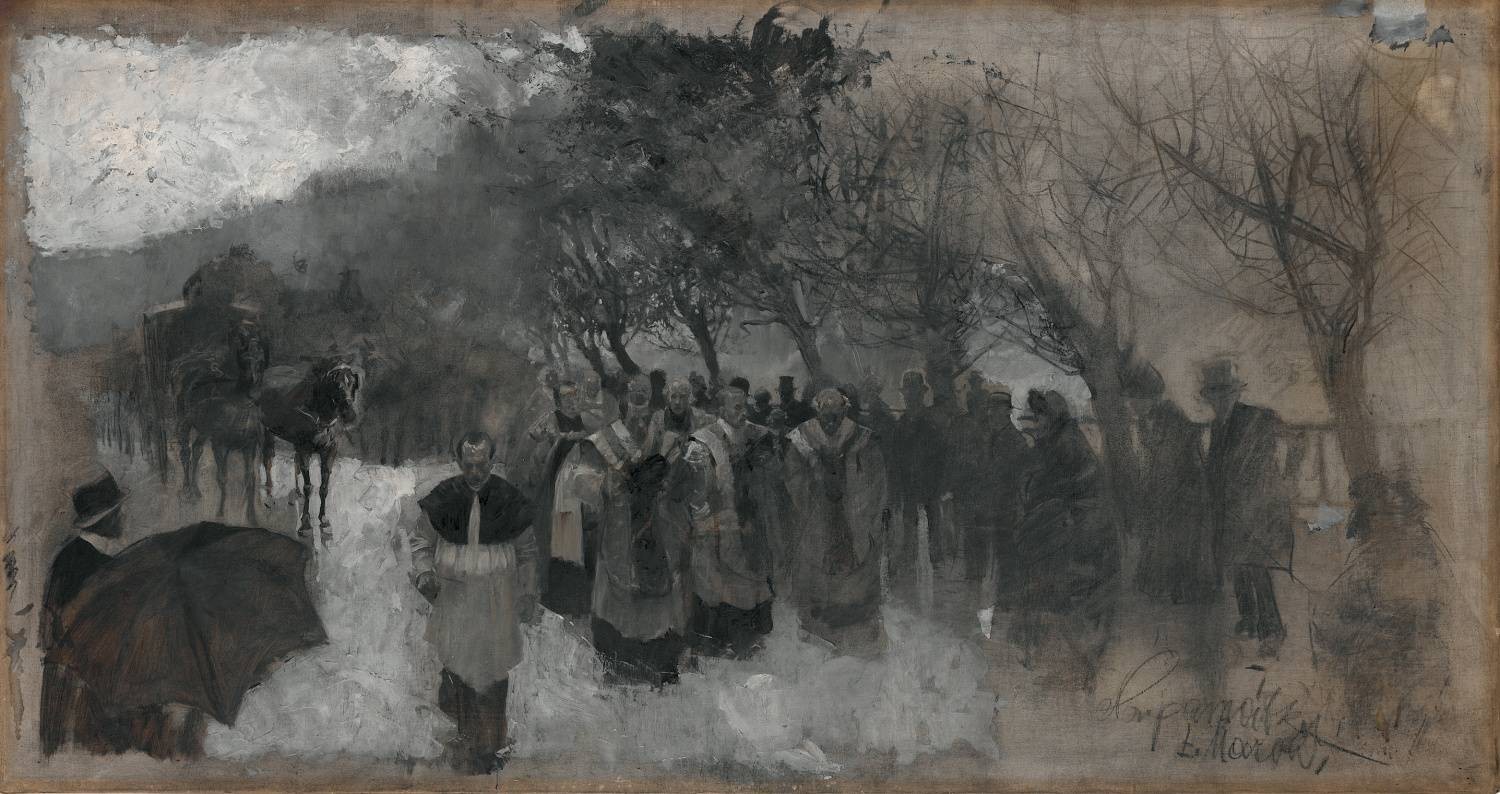