The Entry of Charles V into Antwerp, [around 1878]

Makart was a world-famous painter, decorator and a prominent member of the Vienna art group Ringstrasse. He started to study painting at the Vienna Academy but was forced to leave. He finished his studies in Munich. He travelled to London and Paris, visited Italy and finally settled in Rome. In 1869, when he was a noted artist, he was invited to Vienna where he was given a studio at the emperor’s behest. In 1872 he established his own studio, fitted with luxurious furniture and antiquities, which soon became a popular tourist destination. Many famous figures visited his studio, for example Richard Wagner, Arnold Böcklin, Ferenc Liszt and, most importantly, Empress Elisabeth.  Makart rented the studio for free to a number of artists who often depicted it in their works. When Makart returned from Egypt (1876), he was appointed a professor at the Vienna Academy. He continued travelling extensively until he finally started to run the studio of history painting at the academy in 1878. His charisma significantly changed the Viennese culture climate and his concept of “Gesamtkunstwerk” (the synthesis of artwork) fascinated his contemporaries. Makart also worked as an interior designer, stage designer and costume designer. He organized extravagant feasts for the emperor’s court, including the famous parade on the occasion of the silver wedding anniversary of the imperial couple. The parade consisted of hundreds of participants in costumes based on Makart’s designs. From 1880 to 1882, when he was the director of the Künstlerhaus, he influenced a whole generation of young artists, including Gustav Klimt. His untimely death was seen as the end of an era.

In 1878 many people came to Makart’s studio to see his monumental painting which became a legend. It was an homage to the last emperor of the Holy Roman Empire. Charles V, creator of the famous project of Habsburg’s “universal monarchy”, ruled over the territories in America, originally conquered by the Spain, and therefore ruled over “the empire in which the sun never sets”.1

Makart’s colossal canvas (520 x 950 cm) called The Entry of Charles V into Antwerp2 was exhibited at the World’s Fair in Paris in 1879 and caused a great stir. The same happened when it was exhibited in the Vienna Künstlerhaus. Due to the great number of visitors (34,000), the entrance had to be controlled by the police.

The painting was later displayed in the Kunshalle in Hamburg3, its smaller version remained in Vienna4 and a copy of the central part ended up in Olomouc. This central part depicts the emperor arriving on a horse accompanied by his escort. The vanguard consists of naked goddesses carrying precious gifts. The models were beauties from the decadent high society who were enticed by the historic nature of the painting. In the forefront there is a dignified woman scattering flowers from a basket. This is Hanna Klinkosch, future Princess von Liechtenstein, who was Makart’s favourite model.5

This special event, which really happened in September 1520, was also attended by Albrecht Dürer. In his memoirs, where he described his journey to the Netherlands, he depicts the expensive decoration of the city gates and the grand feast prepared on the occasion of the emperor’s arrival with a number of musicians and beautiful women. He wrote to his friend Philipp Melanchton that he was watching them “without shame because he is a painter”.6 There is a possibility that in some part of the procession or in some places (for example, on the balcony) the women really were naked, as depicted by Makart. Unwittingly, Makart reminds us of the emperor’s love of women, as can be illustrated by his famous quote: “I speak Spanish to God, Italian to women, French to men and German to my horse.”7 Makart depicts the emperor using artistic licence – he looks very different than in his well-known portrait by Bernard von Orley displayed in the Louvre. Makart omitted his characteristic family features: thick lips and a pronounced chin. On the contrary, the emperor is depicted as a handsome man in a beret with a feather, his hand stretched towards a man in his suite. This man is Makart himself.

To highlight this dramatic, romantic scene, Makart used a mostly vertical composition which should symbolise a journey to success. The diagonals allow space for the wealth and glory of Charles V.9 The choice of dark, heavy colours with a “hum” (Farbenrausch) resemble old masters such as Titian and Rubens who also saw Charles as the ruler of the world. Titian depicted Emperor Charles V at Muhlberg in an attacking position (1548, Madrid, Prado) while Rubens showed him as a lone victor (Allegory on Emperor Charles V.) Makart’s work was a symphony that was incomparable at its time. It was even better than his previous painting celebrating the last queen of Cyprus. This sensual painting – Venice Pays Tribute to Caterina Cornaro10 – was also inspired by Titian and Veronese. Makart tried to surpass the splendour and pomp of Veronese’s paintings which also depicted the queen of Cyprus. Makart was inspired by the dense colours and exalting Baroque themes. He was influenced by the dynamic, pathos and splendour of Rubens’s grand paintings (especially the wedding of Henry IV with Marie de’ Medici).

Makart also competed with the works of his contemporaries, such as Thomas Couture, who achieve fame in the official French scene with his spectacular painting Romans During the Decadence (1847). Makart was looking for a suitable scene and, thanks to coincidence, this historical event is linked both with the Habsburg dynasty and Flemish history which caught the attention of many artists. We can mention two examples, painter Louis Gallait, trained at the Antwerp Academy, the most active school of history painting, created a painting called Abdication of Charles V in 1841, while Karel Svoboda’s painting is called Emperor Maximilian I Arrives to Gent.11

Just like Charles V not succeeding with his universalism, Makart’s work was disregarded for a long time. Art theoreticians Agnes Husslein-Acro and Alexander Klee point out the disapproval of Austrian art historian Robert Stiassny who saw the luxurious, “magical” nudity and naïve sugariness of Makart’s paintings as an “aesthetic perversion”.12 Makart’s style called “Makartstil” and his “fancy Art Nouveau” with the excessive decorativeness of the Ringstrasse was also deplored by architect Adolf Loos, member of the younger generation of artists of that time. His motto “ornament is a crime” also applied to Makart’s paintings which were soon seen as kitschy. That is one of the reasons why was The Entry of Charles V into Antwerp removed from the frame and rolled up and sold to a private collector. It was not until the end of the 1970s, when the director of Hamburg Kunsthalle Werner Hoffmann bought the painting and overcame the aversion to historicism. The painting was then displayed in Hamburg and became a sensation.

3. This monumental painting from the Hamburg Kunsthalle collection was restored and displayed only recently – Husslein-Arco – Klee 2011, p. 14 mentions the essay by Werner Hoffmann “Makart: A Pioneer?“

7. Regarding the emperor’s relationship towards women, see Seibt 1999.

8. The deciphering of the work is the subject of a monograph by Gerbert Frodl (1974).

9. Charles was the son of Phillip the Handsome and Joanna of Castile; he was born in Gent in 1500. He was the Duke of Burgundy (1506), King of Spain (1516), Archduke of Austria and King of Rome (1519). Pope Clement VII crowned him the Holy Roman Emperor in 1531. In 1556 Charles abdicated the Spanish throne to his son Phillip II and the title of Emperor to his brother Ferdinand.

10. The painting is in Berlin’s Gemälgalerie.

11. He planned to give the painting as a wedding gift to future Empress Elisabeth of Bavaria. 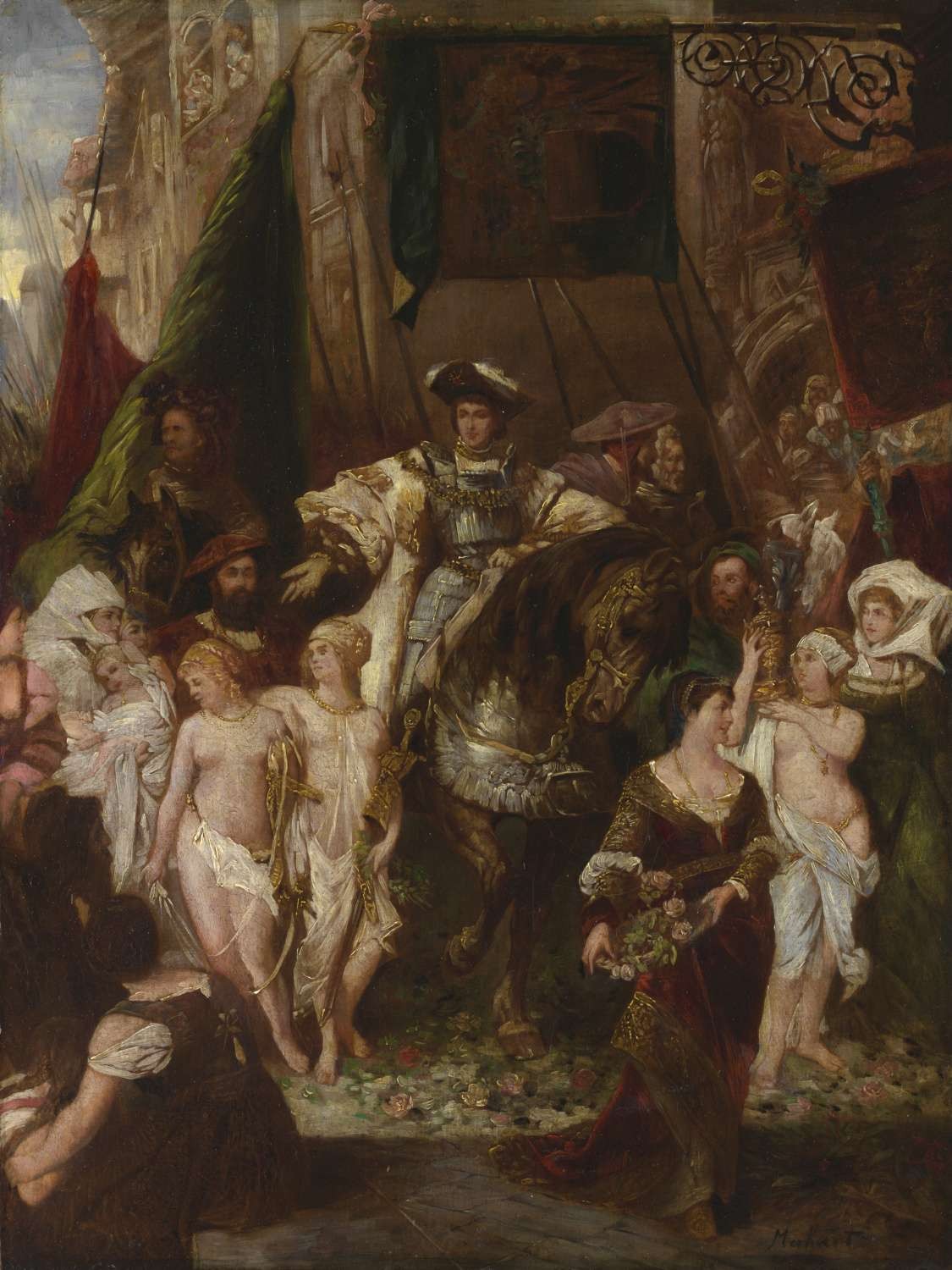 Hans Makart
The Entry of Charles V into Antwerp, [around 1878]
Related