Historic Architecture with Staffage, [after 1805]

Kohl was a Prague painter of architectural motifs and historical compositions, draughtsman, carver and engraver. He studied at the Academy in Vienna in the copper engraving studio under prof. Jacob Schmutzer. Kohl was also a teacher and tutor. He was the son of a tax collector from Prague and great-grandson and grandson of two sculptors. He visited the studio of Norbert Grund and decided to become a painter. Because society was obsessed with antiquities, mainly due to the historic discoveries of Herculaneum and Pompeii, Kohl decided to study history. He exhibited his work, a scene from Roman history, for the first time around 1769. The popularity of the painting won him a spot at the Viennese Academy. After he returned to Prague in 1770, he became a teacher at an ordinary school because the situation was unfavourable to art. Nevertheless, he continued to paint history motifs. He also created religious paintings and portraits. Eventually he specialized in architectural motifs and gloomy stories. In 1783 he founded a free-of-charge Sunday school for artists and artisans and created collections of designs for artworks. His pupils were Antonín Machek, Josef Malínský, František Horčička and others. He also taught drawing in noble families. In 1818 he was awarded a golden medal and, in 1820, Emperor Franz Joseph I gave Kohl a brilliant ring in appreciation of his painting. However, this once highly regarded artist was almost forgotten for a long time and his artistic significance undervalued.

Olomouc paintings come from the short period of time when Kohl created restrained, austere Neo-classicistic paintings brushed with emotionally exaggerated pre-Romanticism. The typical motif of this time was prison, where were held not only criminals, but also unwanted revolting individuals. These types of stories were popular in the era of early Romanticism.

The first Olomouc painting may have depicted – as suggests the note on the frame – the falsely withheld classical philosopher Socrates (469–399 BC),1 even though the content deviates from the traditional depiction of this story. A figure, illuminated by light, is sitting in a vast prison; a man is standing opposite. Two figures, turned away from the viewer, are depicted in the Baroque-style repoussoir technique, used to create an illusion of depth. The bleakness of the prison is multiplied by monochrome brown and amber tomes. The plaintive atmosphere is highlighted by a romantic element – moonlight in a cloudy sky. It shines through the railing on top of the impregnable prison. Even though the traditional iconography of Socrates is barely present, the depiction of the night sky is almost the same as in a painting called Socrates in Prison from a private collection.2 This painting shows the dramatic moment when the philosopher accepts a cup of poison in a circle of his students.

As suggests M. Pánková,3 Kohl, inspired by the 18th century popularity of ancient history, created a set of drawings and paintings with this motif.4 As a teacher Kohl paid a lot of attention to antiquity. He copied the samplers of classical architectural elements published by renowned architects (Soufflot, Leroy, Stuart, Revett and others). The first of Kohl’s architectural paintings was Socrates in Prison. In 1799 this painting by Kohl was mentioned by Pařízek5, but it is dated 1801. This mistake was copied by I. R. Wilfling6 who mentions Kohl’s two paintings of the imprisoned philosopher.7 A painting of this motif is present in the catalogue of the Society of Patriotic Friends of Art.8

The identification of the other paintings by Kohl from the Olomouc collection is also complicated. It is difficult to find historical connections because the stories are usually fictional and the architecture, as well as the clothing, do not match. Kohl created the painting during his most romantic period, which started around 1800. Influenced by then popular “gothic” or “black” novels,9 he depicted conspirators in dark buildings plotting their schemes or members of enigmatic organisations guarding their secrets.

The conception resembles a theatre set. Kohl was inspired by three basic types of stage settings: “temples, halls, and prisons.”10 To accentuate the atmosphere, Kohl used older artistic styles. He was inspired by Baroque dramatic lighting and indented design of prisons, as we can see in the Olomouc painting. The massive building with an elegantly dressed prisoner with clothes from the late 17th century resembles Kohl’s painting with Cistercian monks in a wine cellar from a private collection.11 Kohl imitated the gloomy atmosphere of the famous Prisons by Giovanny Battista Piranesi12 whose geometrically thorough perspective of space also inspired other Czech artists, for example J. Hagera.13 Kohl was also influenced by stage decoration by Italian scenographer Galli-Bibiena and his engravings which were used even in Czech Baroque plays (for example, in the palace theatre in Český Krumlov). Giovanni Paolo Gaspari designed decorations for early Baroque prisons for Count Špork’s palace theatre in Kuks. Josef Platzer also created prison decoration – for Waldstein theatre in Litomyšl.

As an educated and diligent teacher, Kohl knew these artists and was inspired by them. What is surprising is the choice of the base. At that time he usually worked with wood panels or, not so often, with canvas. Copper is more suitable for highly detailed paintings, but Kohl was clearly not interested in details, as we can see in the figures. The delineative architecture and details, such as the staircase and stone blocks, could have been more thoroughly elaborated on.

Both paintings show the same rather routine palette of a masterful painter. Kohl is a great painter of architecture motifs, but is not as good at painting figures.

1. Both of Kohl’s paintings from Olomouc are related to the F. A. Borovský collection in Prague which included the paintings Socrates in Prison and Wenceslas IV in Prison present at the Seznam umělecké výstavy u příležitosti Všeobecné zemské výstavy z roku 1891 v Praze as cat. no. 948: Wenceslas IV in Prison (100 guldens) and cat. no. 949: Socrates in Prison (100 gl.). It is possible that the frames with tags were switched and the paintings do not match their titles.

4. It was followed by “Egyptian” intermezzo (1809–1816). From 1810 he was also interested in temple interiors (especially St. Vitus Cathedral) and Gothic interiors.

12. Giovanni Battista Piranesi (1720–1770), together with Publisher Giovanni Bouchard, published a set of vedute of ancient and modern Rome and the collection of sixteen fictitious Prisons (Carceri d´Invenzione). They were so popular that he published them again in 1716, this time in his own publishing house.

13. For example the decoration of Château Měšice. 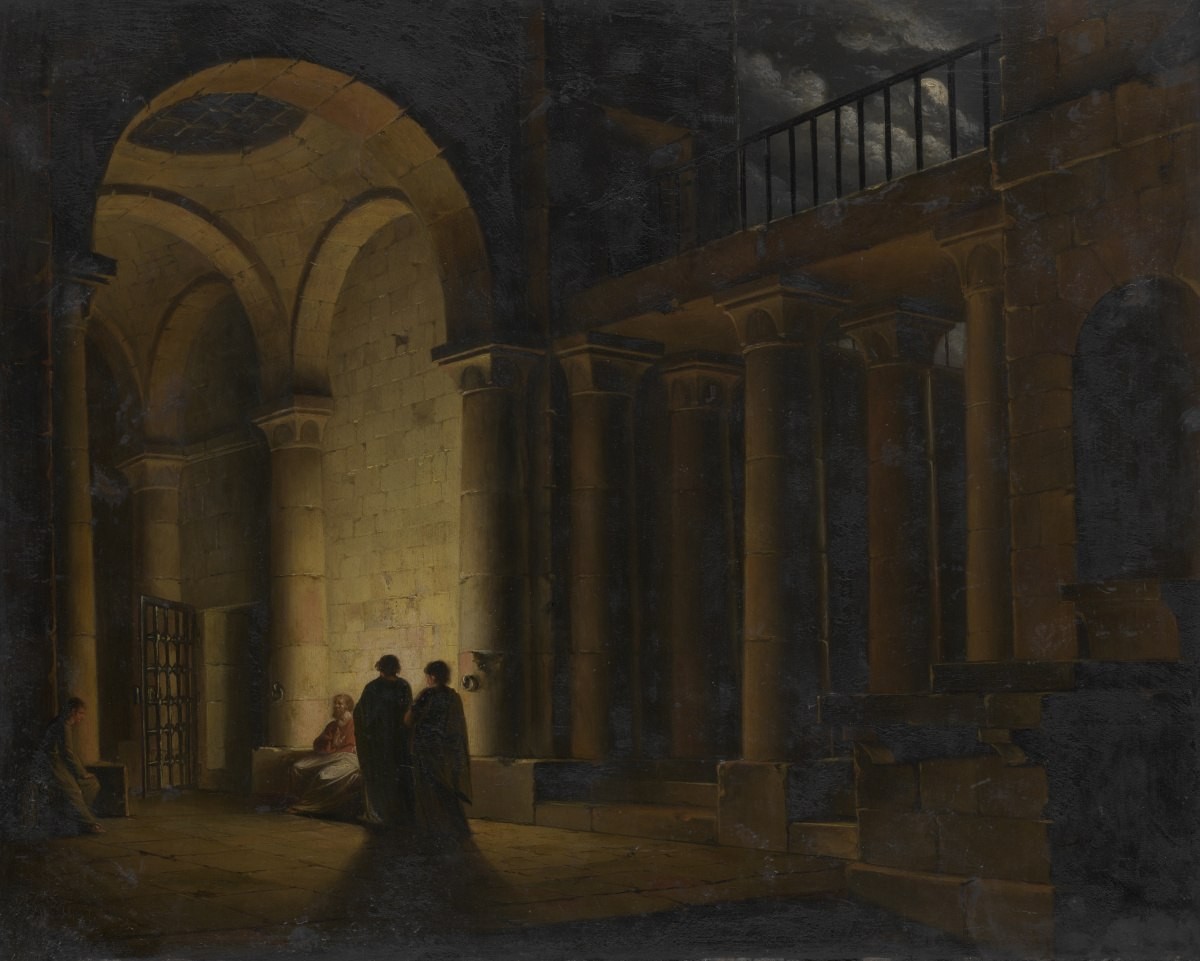 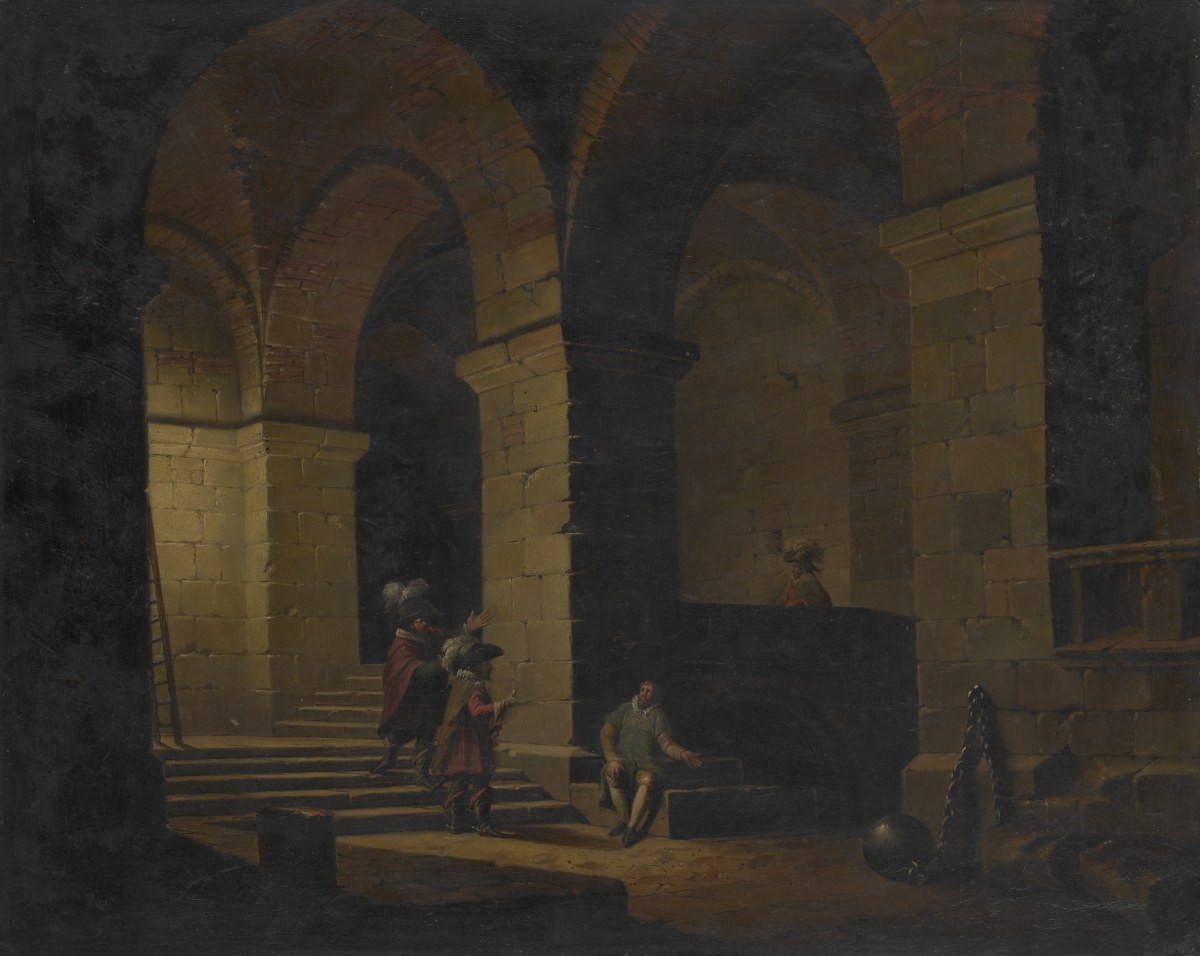