Hynais was a prominent figure of the Czech art scene and a prominent painter of the second generation of artists working on the decoration of the National Theatre. He came from a Czech family living in Vienna, where he attended the Academy. He was taught by Karl Wurzinger, August Eisenmenger and Anselm Feuerbach. When Hynais received a scholarship to study in Italy (1875-1876), Feuerbach wanted to hand over his studio there to him because Hynais was his favourite student. Hynais briefly visited Prague in 1876 and then he moved to Paris and studied at the École des Beau-Arts under J.-L. Gérôme. He was supported by P. Baudry (he left him his palette and the like) with whom he prepared the decoration of the Vanderbilt residence in New York. He allowed Czech artists to stay at his studio. Hynais won the competition for the decoration of the staircase and royal box at the National Theatre (1880) as well as its curtain (1883). With the help from architect J. Hlávka, he also participated in the decoration of the Court Theatre in Vienna for which he was awarded the Knight’s order of Franz Josef I and the Order of the Iron Crown of the Third Class (1887). In 1890 he was appointed a knight and later became an officer of the French Légion d’honneur (1923). Just like Gérome, he also prepared designs for the porcelain factory in Sevres (1888-1892), but he rejected an offer to become its director. Instead, he accepted a professorship at the Academy in Prague (1893) and repeatedly became its rector (1894–1895, 1899–1900, 1901–1902). Hynais also created posters for the General Land Centennial Exhibition (1891) and the Czech-Slav Ethnographic Exhibition (1895) and decorated the pantheon of the National Museum (1895-1996). He became an exceptional and, later, a regular member of the Academy of Sciences and Art (1890, 1897) and received the Academy’s Award (1891). He exhibited at the World’s Fair in Paris and was awarded with a golden medal (1889-1900).

This portrait of a girl with brown hair and poetically and melancholically tilted head is strangely enough, both casual and elegant. The viewer is capture by the lightness and delicacy of the brushwork which was typical of Hynais, especially at the beginning of his stay in Paris. This seemingly simple portrait is built on subtle and sophisticated contrasts. One of them is the girl’s shiny pearl earring with a tiny golden charm. The girl’s youth, highlighted by her porcelain smooth skin, is enhanced by the translucent scarf painted with perfection, reminding us of Hynais’s great paragon Giovanni Battista Tiepolo. Tiepolo’s portrait of a girl with curly, tied back hair stands out on a loosely hatched, smoky grey-blue background on a brownish undercoat. This type of transparent, seemingly careless background resembles the great Jacques-Louis David, who employed a similar method at the apex of his career and endangered his artistic future.  He accentuated his perfect portrait with a provocatively “messy” and sketchy background. Even though he amplified the effect of the painting, he also irritated his noble clientele (for example, Madame Récamier).

The Portrait of a Girl also resembles the repertoire of salon painters, such as Gustave-Jean Jacquete, depicting luscious ladies with muslin veils around their alabaster necks. However, unconventional Hynais did not like the sugary glossiness of salon paintings and paid more attention to the natural beauty of the girl and tried to capture the psychological dimension of the painting. The reconciled and plaintive mood of the young girl momentarily tormented by the burden of her life urges the viewers to sympathise with her sadness. The viewers are subconsciously searching for the reasons of her sorrow.

It is clear the portrait was created with understanding and sophistication. The portrayed girl – a similar type can be seen on Hynais’s curtain in the National Theatre in Prague – may have belonged among the circle around Hynais’s friend to whom is the painting dedicated. This “dear and good friend” was Doctor Émile Valtat. Hynais portrayed him the year before. Valtat helped Hynais during his material difficulties and probably saved his life. Hynais suffered from a condition called erysipelas, known also as “red skin”, and Valtat was his physician. Patients of this needed to rest and, therefore, Valtat ordered Hynais to stay at home. But Hynais did not heed this advice because he could not stay at his lodgings. As he stated in his letters to his family, he had to look for clients because he did not have money to pay for the treatment. The Portrait of a Girl – dedicated to Dr. Valtat – was his way to say thank you. Maybe it was also an apology for his unruliness for which he paid for for the rest of his life – because he did not finish his treatment he became blind in one eye. Hynais dedicated one more painting to Valtat, a replica of Mary Magdalene, patron of medicine, which was bought by the Masaryk foundation and is now displayed in the President’s office at Prague Castle.

Hynais’s present to Dr. Valtat is now a part of the collection of the Olomouc Museum of Art and is Hynais’s masterpiece, which confirms that he knew works by Paul Baudry, Alfred Stevens, Jean-Jacques Henner, Luc-Olivier Merson and Albert Maignan. In spite of that fact – or maybe because of that fact – this small painting is a unique piece of evidence of Hynais’s artistic qualities and creative intelligence. 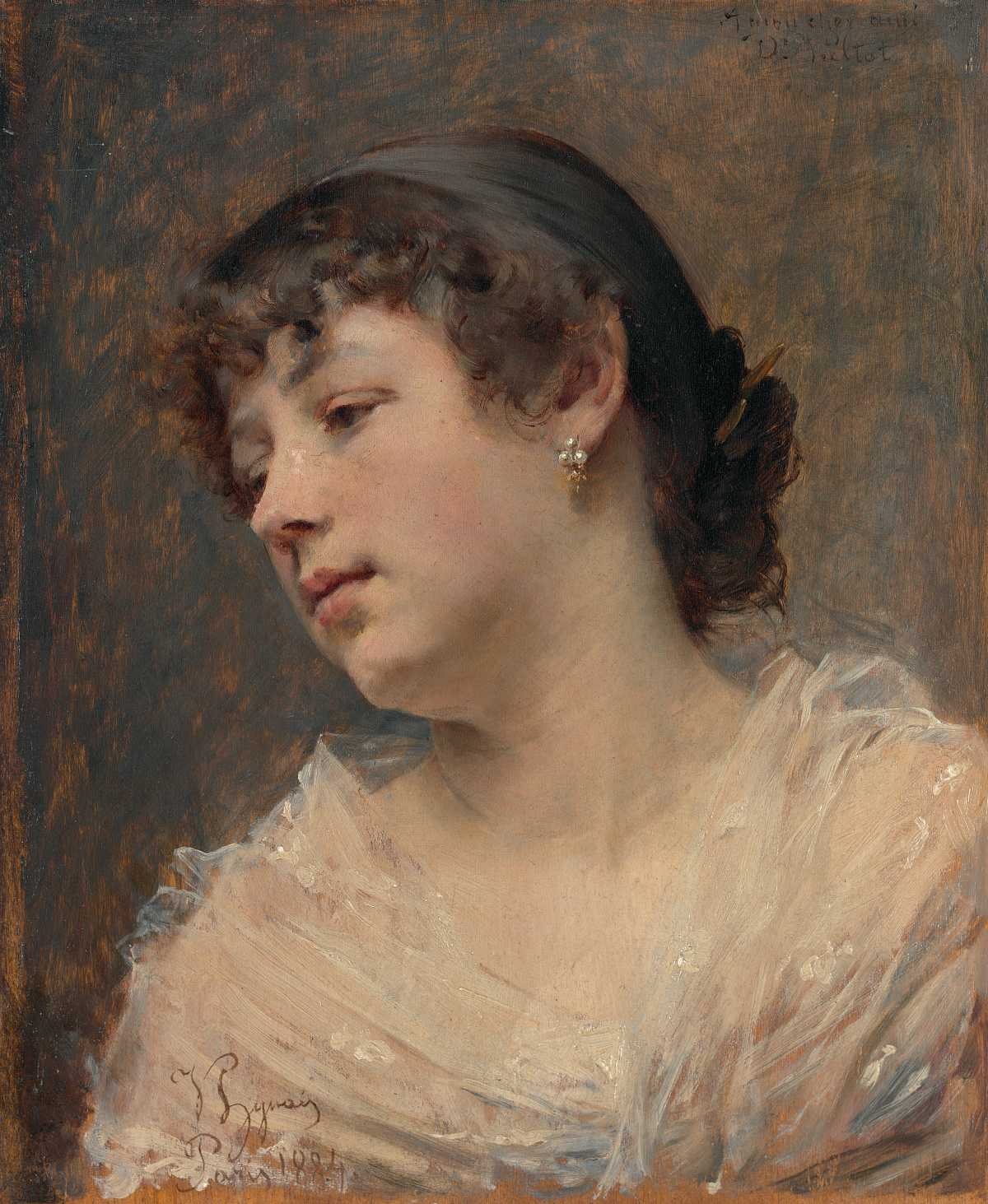