Hudeček was one of the most important Czech landscape artists of the end of the 19th century. He studied at the Prague Academy in the studio of genre painting run by Professor Maximilian Pirner. In 1891 he moved to Munich and studied figure painting at the private school of Anton Ažbe. In 1892 he enrolled in the Munich Academy under prof. Otto Seitz. However, the following year he attended Václav Brožík’s studio of figural painting at the Prague Academy. Because Brožík often stayed in France, Hudeček befriended landscape artists from the Mařák School. He joined them in their travels to Okoř, Vysočina, Sicily and Salzburg. After he finished his studies (1895), he regularly visited the region of Okoř and there he created his famous melancholic paintings. At that time he combined landscape painting with Art Nouveau style figure painting. From 1906, he sought inspiration in Starý Kolín and, from 1909, around Police nad Metují. He also travelled to the sea (the Mediterranean Sea and Rügem) and mountains (the High Tatras and Carpathian Ruthenia). Hudeček was inspired by Scottish landscape painting (especially Robert Macaulay Stevenson) which was exhibited in Prague in 1895 and by the Worpswede School of Landscape Painting exhibited in Prague in 1903. He was a founding member of the Mánes Union of Fine Arts (1887) and a member of Viennese Hagenbund from 1906.

Antonín Hudeček was interested in the motif of forest interiors, especially in the 1900s. His best work with this motif of a spruce forest is a series of paintings from 1911 called Forest in the Sun,1 Forest after the Rain,2 Forest3 and In the Forest,4. Hudeček focused on the rhythm and harmony of spruce trees and the atmosphere of the silent forest. While these paintings are done in impressionistic style, this painting is less ornate. Short brushstrokes and gloomy shades of grey, dark green and brown resembles Prucha’s Expressionism.

The painting depicts a coniferous forest with a path, partly blocked by rocks that have fallen from the hillside. The horizon, represented by the rocky forest ground, is approximately in the middle of the painting. A dark blue sky and the light at the end of the path are peeking out through the trees. Hudeček aptly captured the melancholy of the forest with leaden grey boulders and grey-green tree trunks emphasised by green moss and lichen. The painting has been part of the Olomouc collection only for a short time, therefore, it was unavailable during the last great retrospective exhibition of Antonín Hudeček. 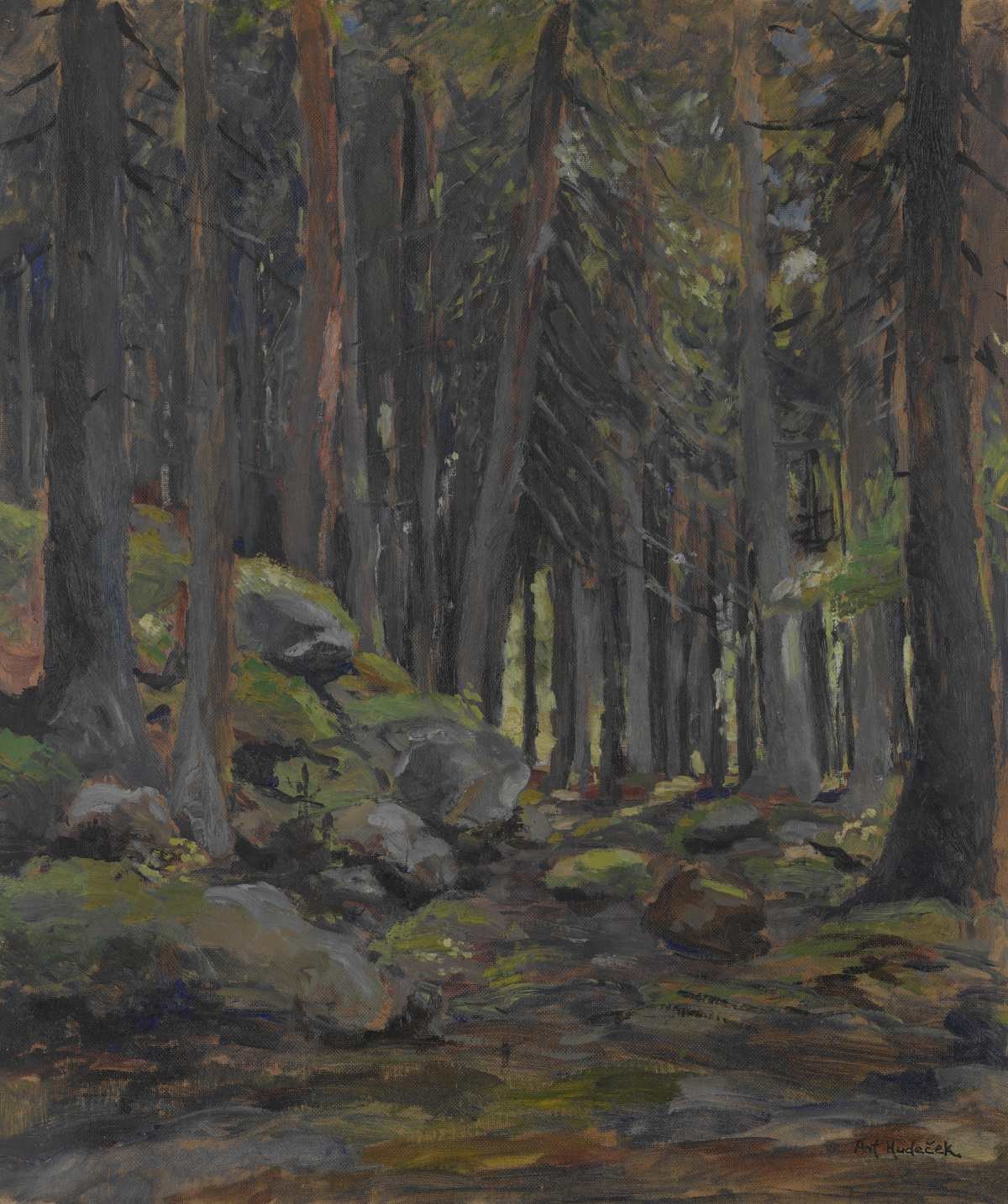