Oil on canvas, 88.5 x 65.5 cm. The original size was larger, on each side ca. 10-15 cm were cut off.
On the back of the new canvas a transferred sig¬nature: van der Hecke F; the original signature was found recently on the reverse side of the old canvas.
Olomouc Archbishopric, No. 425.

Provenance: The painting was part of the historical collection of the picture gallery of the bishops of Olomouc and with some exceptions it can be traced back until the end of the 17th century, when before 1691 it was acquired probably by Bishop Karel of Liechtenstein hut did not become part of the Inislenraed collection.

An X-ray examination and an examination with a camera sensitive to infrared light were made. The X-ray picture confirmed the existence of two different styles of the painting. The flowers are painted with the bravura of a renowned painter. Each brush move is placed right in the proper, definitive place. The colour paste models each blossom according to its species. On the other hand, the two figures in the middle are painted in an immaterial way and hardly appear in the X-ray picture. The flowers reach under Madonna s head and under her mantle, which can be seen even in ordinary light. This fact as well as the completely different treatment of the flowers and the figures led us first to the hypothesis that the fig¬ures in the middle were not original and that they might be covering a quite different motif (perhaps a portrait?). But the X-ray ruled out that hypothesis.

Infrared and ultraviolet analyses failed to bring any fundamentally new facts - no underdrawing and no later changes were found. Small additions under as well as on the old varnish were found but they are insubstantial because they only hide small defects.

In the 17th century, the painting of floral still lifes in the southern Netherlands combined the artistic objective and the spiritual content, as it was required by the programme of Catholic Reformation. This is clearly shown in the work of Daniel Seghers, who after Jan I Brueghel was the most important painter of floral still lifes. Among his followers were Jan Philippe van Thelen, Jan van Kessel, Nicolaes van Verendael, Jan I van den Hecke, Hieronymus Galle, and others. In their work the Baroque votive picture combining figures and flowers reached the highest level. In the Olomouc collection this kind of the Flemish still life is represented by the Rosary Madonna in a Garland. Although the comparative study, based primarily on the KKD documentation, first did not lead to any clear conclusion supporting Jan van den Heckes attribution,1 the recent restoration and technological analysis uncovered the original signature and thus confirmed the correctness of the hypothesis pronounced in 1970 (in the letter of 13 June) by M. L. Hairs: I think it is right to believe that the inscription on the hack of the painting really refers to the painter Jan I van den Hecke. The original canvas was cut to a smaller size and 1 believe that during the relining Heckes inscription was transferred there from the cut-off margin.2 Pictures of flowers by Jan van den Hecke are rare. Thus it is difficult to compare the style of the Olomouc picture and of the paintings that can be attributed to Jan van den Hecke with any certainty. That is why I can support this attribution with reservations only, though I believe it to be well-reasoned and likely. On the other hand, van den Hecke also painted human figures and therefore could be the author of the middle part of the Olomouc picture. If for no other reason, so because there is no resemblance in style between this Madonna and Quid on one hand and the scenes painted by well-known painters such as Cornells Schut, Jan Boeckhorst, Abraham van Diepenbeeck and Erasmus Quellinus on the other hand. It cannot be ruled out that van den Hecke painted this picture around 1671 on the occasion of the 100th anniversary of the Battle of Lepanto, with which the spread of the rosary is associated.“ To all this we can only add that the poor quality of the figures is in contrast with the virtuoso ren¬dering of the flowers. Also, they were painted somewhat later because in places they overlap the inner edge of the wreath.

1 Partial similarities were found between the Garland from the Leopold Wilhelm collection (Vienna, Kunst-bistorisches Museum) and in the Garland in the St Lucas (lalerie in Vienna (1963-1964 exhibition, no. 5397) and especially in the Floral Still Life from the Fondation Custodiu (Fritz l.ugt collection) in Paris.

2 The original signature is preserved on the reverse side of the canvas complete except for the last two letters, which were lost when the size was diminished. 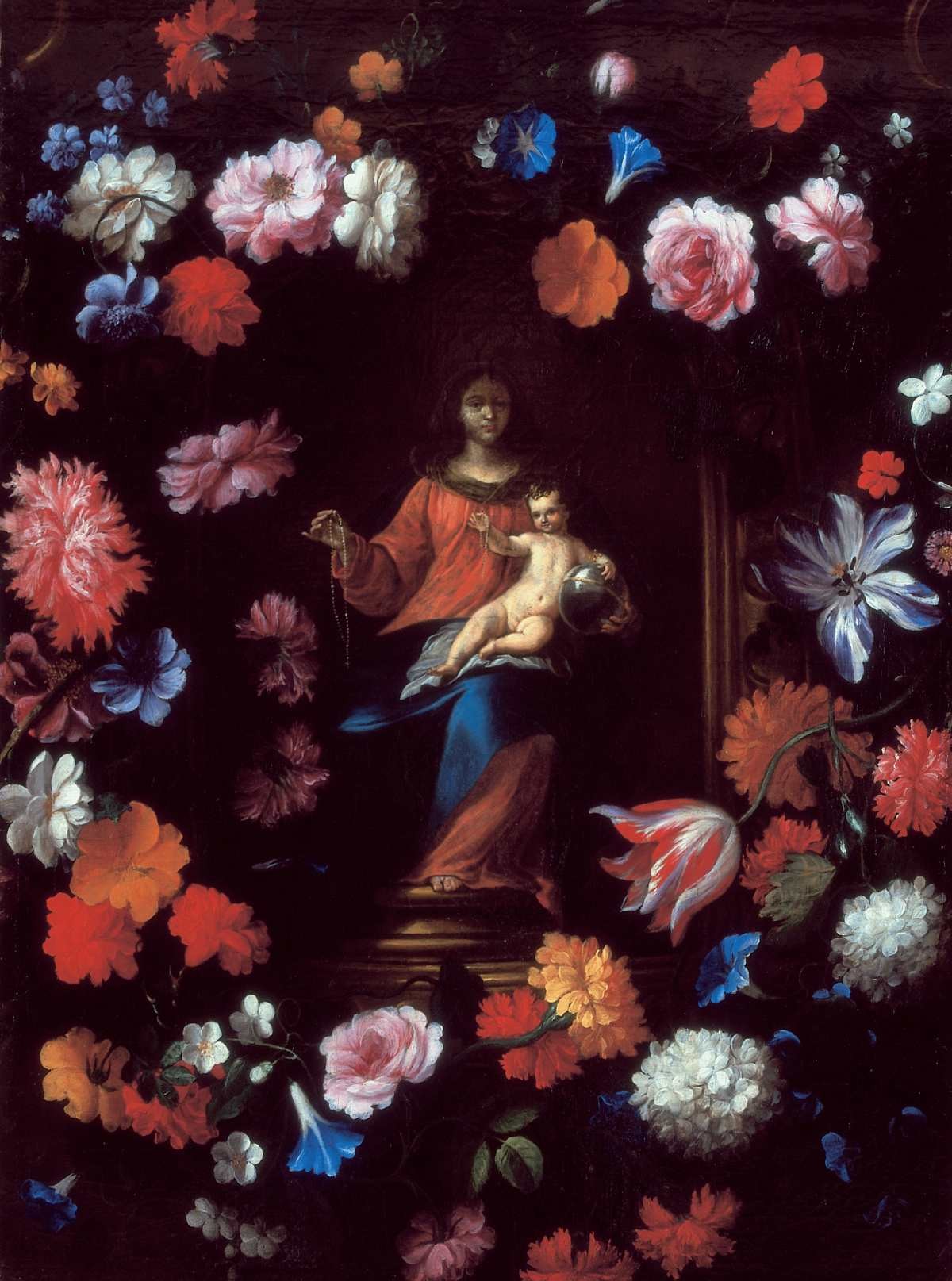 Jan I. van den Hecke
Rosary Madonna in a Garland, [around 1671]
Related