Cottage under a Hill, [3rd quarter of the 19th century]

Havránek, characterised by his delicate brushwork, belongs among the most prominent Czech landscape painters, however, it is not widely known that he was half French. František Bedřich Havránek (Hawranek) was the son of detective chief superintendent Antonín Havránek and a French woman named Antonie, née Dequoy. Thanks to his unique artistic talent, he was admitted to the Academy in Prague at the age of fifteen. He studied landscape painting under Antonín Mánes. His fellow students were Antonín Liehm, Eduard Herold and Bedřich Anděl. For a short time, he was also taught by the rector of the Academy, Christian Ruben, and his son-in-law Max Haushofer (Havránek’s cousin). In 1840, Havránek joined Haushofer’s school and travelled with them to the Alps, mostly near lakes Chiemsee, Königsee and Obersee. Havránek started to exhibit his landscapes in 1843. He depicted the area around Plešné jezero in Šumava and looked for motifs in Bohemia, Poland, Galicia in Eastern Europe, Switzerland, France and England. He was friends with Jan Novopdcký with whom he travelled around Europe. He later became the art teacher of Archduke Ludwig Salvador of Tuscany and illustrated his travelogue Balearic Islands (Die Balearen). He also illustrated various other publications (for example, Otto’s Bohemia) and engaged in the organisation of Prague artists’ balls and illustrated the dance cards and programmes. At the end of his life (1890), he was elected among the elite of the nation – he became a member of the newly founded Czech Academy of Sciences and Art.

Even though Havránek travelled around Europe, this landscape comes from the Central Bohemian Uplands. It is not only the routine work of an experienced landscape artist depicting a white house with a thatched roof nestled at the foothills but of a well-travelled artist. Havránek created the harmonic atmosphere of a landscape near mountains. In the forefront, the terrain is blocked by large boulders, while the calm river Sázava flows through the middle. The golden ratio part of the painting is marked by the tall poplar with smaller trees behind it. On the left there are some darker clouds indicating a forthcoming storm. The threat of the storm is enhanced by the scenic beauty of the landscape.

The authentic looking landscape with impressive light contrasts an illustrative example of two inspirational trends: the emotional view of a landscape promoted by Mánes is affected by the pathos of German Romanticism of Haushofer’s school. The painting is a great example of Havránek’s ability to capture the essence of the landscape. Regarding Czech landscape painting, he stood out due to his unobtrusive but effective details. Here it is the fresh and charming detail of the “duvets aired in front of the cottage.” Viewers familiar with Havránek’s works will also appreciate another of his typical components – a tuft of grass in the forefront, captured in every detail. It is even more effective when placed in contrast with simple, compact boulders. 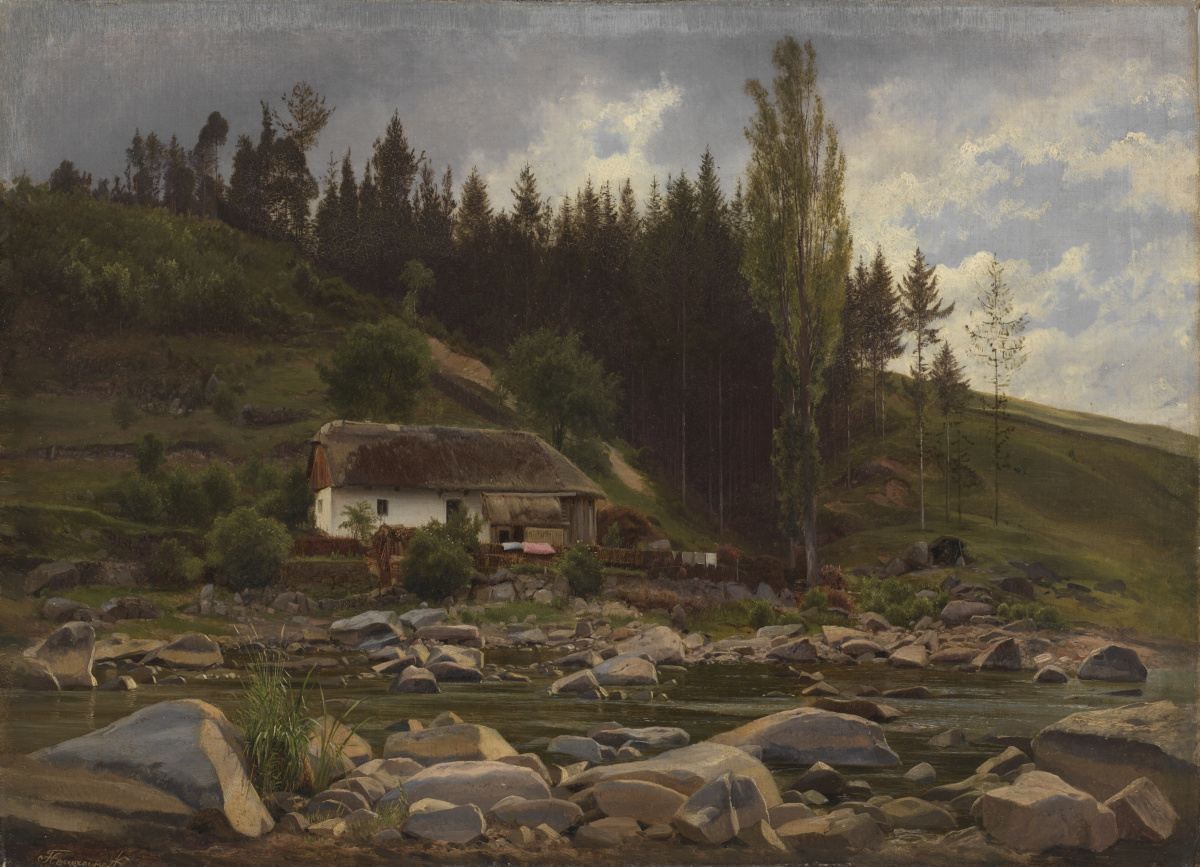 Bedřich Havránek
Cottage under a Hill, [3rd quarter of the 19th century]
Related