Lili Göld-Brandhuber was a painter, printmaker and sculptor. Her family owned a factory in Vrbno and her father Karel Brandhuber served as the last mayor of Olomouc in the Austro-Hungarian era from 1896 to 1918. Lilli Brandhuber studied landscape painting in Vienna under Adolf Kaufmann, later painting and graphic art in Prague under Hermína Laukotová and Václav Jansa and finally painting in Munich under Richard Kaiser and Hermann Groeber. At the beginning of the 20th century, she lived in Prague but kept up with the art scene in Vienna and Munich, where she eventually lived until her death. She was a member of the German Art Union in Prague, the Austrian Association of Women Artists and the Munich art group Luitpold-Gruppe. She received a Silver State Medal in Vienna and a Schindler’s Medal in Brno. She mainly created landscapes, portraits, etchings, bookplates and other utility graphics. Her life and works are not yet well known, even though she regularly exhibited her works in Prague and Moravia, especially in Olomouc due to her family connections, from the beginning of the 20th century.

Lily Brandhuber was significantly inspired by landscape artists from the artists’ colony Worpswede, whose works she encountered at their famous exhibition in Munich in 1895. As these artists also did, she depicted nature very faithfully and gently and her works belong to the style of natural lyricism. In Olomouc, her works were regarded as the more valuable of local production. “Her exhibited collections were not extensive, but they were admired by German-speaking audiences.” Her favourite motifs were landscapes with lakes and mountains (sometime even the Alps) and the seaside with rural architecture. She focused on trees and forest pools, especially during the years when she also created the painting Even-fall Atmosphere, painted in Munich. One of the paintings exhibited by Brandhuber at the 65th annual exhibition of Kunstverein für Böhmen in Prague in 1904 was an oil painting called Forest Pond (p. 7, cat. no. 64). Another oil painting with the same motif (p. 26, cat. no. 344) was presented the next year at the following annual exhibition. The same name could also be applied to the Olomouc painting which depicts vegetation around a dark forest pool, however, it is not possible to identify our painting with one of these paintings due to lack of distinguishing data.

The atmosphere of the painting, the calm before the storm, is very emotive, but not unambiguous. The viewer is lured by the mythical secret as well as frightened by the sadness and despair. Even the period reviews, cited by Alena Trčková-Schulcová, poetically characterized the painter’s works as evoking the feelings of a heavy sadness, “the weight of the earth, chill of forest and smell of soil”. The colours are also rather earthy, as the painter uses an especially dark brown and shades of green. The motif corresponds with the topos of the forest of that time, expressed in poetry such as by poet Jaroslav Vrchlický. 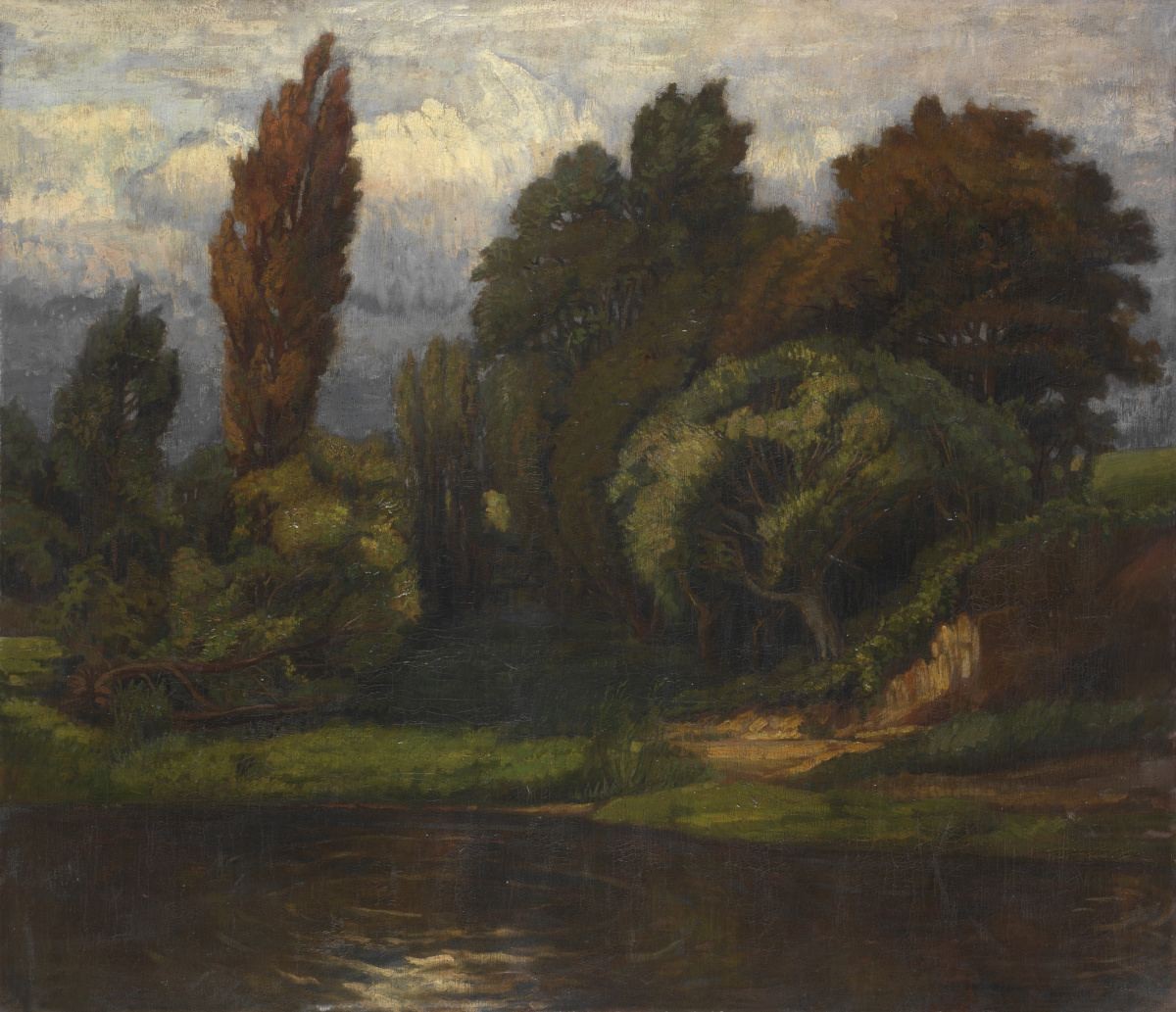