Virgin and Child with the Animals, [after 1503]

The painting was first registered in the catalogue to the exhibition held in 1900 in Olomouc by the German Society of Friends of Art. Referred to as "the German school of the 15th century", it was owned by the Metropolitan Chapter at St Wenceslas in Olomouc and formed the centre of a pseudo-triptych. Its parts could not have been assembled in one whole before the 19th century. The panel with Saint Roche, by an imitator of Cesare da Sesto, which could have only reached Olomouc in the 19th century, formed the right wing, while the painting St John the Baptist by an Italian artist of the second half of the 16th century formed the left wing of the pseudo-triptych. O. Pujmanova refers to the Olomouc Madonna as a work from the Netherlands in conjunction with the triptych, which is understandable since the painting clearly continues the iconographic scheme of the Madonna in the garden or landscape, frequent in Netherlandish painting in the last third of the 15th century. Most recently the painting was published on as a work of a follower of Albrecht Dürer by M. Kostelnickova in 2006.

The composition with the theme of the Madonna seated on a grassy bench in the countryside, with St Joseph, and with shepherds in the fields and the arrival of the Three Magi, must have been developed by one of Dürers followers, active in Germany in the first half of the 16th century, loosely based on Dürers coloured drawing the Virgin and Child with the Animals (1503), now in the Albertina in Vienna (No. 3066). Among other elements found in Dürers works and appearing in the Olomouc picture, are St Joseph drawing water from a well (copper engraving The Birth of Christ, 1504), a half-timbered house (copper engraving the Virgin and Child with a Monkey, around 1498, Albertina), a bull (copper engraving Adam and Eve, 1504, Berlin, Kupferstich-kabinett), a castle on the horizon (copper engraving St Eustache, around 1501, Vienna, Albertina; or the coloured drawing View of a Fortified Castle on a Rock, a copy after Dürer, Musee du Louvre, No. 18595), and others. A less probable case that it is not a creative work based on motifs from the composition, with additional typical elements adopted from some other graphic art by Dürer, cannot be ruled out either, but instead a mere reproduction of another, unpreserved model by Dürer. Another surviving drawing version of the subject (Madonna and Child in a Landscape with the Shepherds, 1503, Musee du Louvre, No. 18603) is evidence of Durers consistent seeking of varieties in composition. When the Viennese drawing was in the collections of Rudolf II in the Prague Castle, numerous copies were made after it. Aegidius Sadeler made a copper engraving after it (National Gallery in Prague, No. R 236740), Hans Pruckendorfer, Daniel Froschl, Jan Brueghel (1604, Rome, Galleria Doria Pamphilj) and other unknown artists produced paintings but the original purpose has remained unclear until recent days, although F. Koreny considered it a modello for the engravings and A. Scherbaum even believes that Dürer intended to use it as a modello for a painting. The recent attribution of the Olomouc picture at least confirms the belief in an earlier use of this drawing in painting.

Dürer returned about five years after the copper engraving the Virgin and Child with a Monkey to the theme of the Virgin and Child on a grassy bench, with its intimate and idyllic rendition reminiscent of the Closed Garden; he did not change the Madonna, again portraying her in accordance with the Italian ideal, but further developing the landscape element, doing so in order to describe in greater detail the story of Christs birth. Durers notorious interest in nature is shown in the numerous botanical and zoological motifs, used in many varieties in the drawings as well in the Olomouc panel.

The Olomouc painting is distinguished by subdued colours, with golden to dark brown and green shades, contrasting with the ultramarine blue of the sky and the garments of the characters. The details of the fi gures in the background, the countryside, and especially the plants and animals are fine, miniature-like. The rendering of plants corresponds to the period studies of plants and herbariums. Apart from the plants and animals realistically depicted, the selection also corresponds to the particular biotope.

Nearly every plant and animal has a symbolic meaning. The Virgins plants - strawberry, iris, forget-me-not and violet - refer to her submission and the Immaculate Conception, with the iris additionally recalling her future suffering. The purity of the Virgin is symbolized by the well with water, along with the swan and the pearl oyster, which gave birth to a precious pearl, Jesus Christ. Christs suffering on the cross is symbolized by the goldfinch, the bullfinch, the bull and the field eryngo, the Resurrection by a butterfly (the nettle vanessa) which settled on a speedwell, symbolizing Christ as the only medicament. Jesus Child leaning out of his mothers lap is pulling the flower to him in order to catch the butterfly and play with it. As F. Koreny had noticed, Jesus in this scene is pictured not only as the Saviour of mankind, to whom both shepherds and kings will pay homage, but also as the lord of the world of plants and animals, the Lord of all creation. 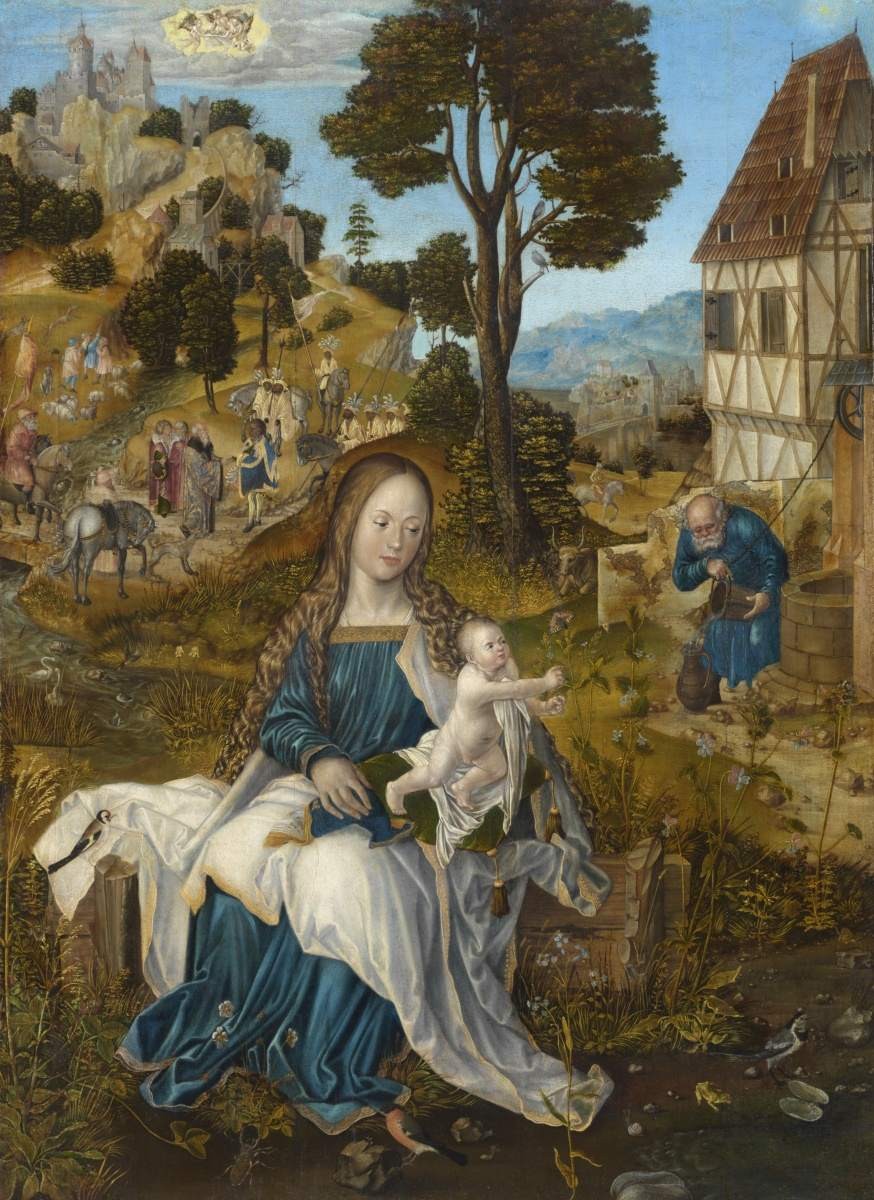 Albrecht Dürer – follower
Virgin and Child with Animals, after 1503
Related