Czech was a Moravian painter of German origin. His father was a brewmaster in the brewery of the Teutonic Order in Horní Dlouhá Loučka in the Uničov Region. Czech learnt drawing at a private drawing school under Peuschl and Deininger (1880–1881). He then continued at the art school Kunstgewerbeschule des k. k. Österreichischen Museums für Kunst und Schloss in Vienna from 1881 to 1887 and his teachers were Karl Hrachowina, Ludwig Minnigerod, Michael Rieser and Andreas Groll. A few years earlier, Eduard Veith studied at the same studio, and he, together with Czech, created the now non-existing curtain for theatre Volkstheater. This cooperation was very beneficial to Czech because he gained experience and adopted Veith’s style of symbolistic painting. From 1890 Czech had his own studio in Vienna. He created ceiling paintings for the theatre in Ljubljana and court church in Innsbruck.1 Near the end of the century, he received a major commission in České Budějovice where he created several portraits of mayors, museum directors and prominent figures of the town. At the beginning of his career, he created mostly decorative paintings, but, in time, he moved from figure paintings to portraits and Vienna city scenes. In summer he often visited relatives in Moravia. After the World War I, he settled in Dlouhá Loučka and created landscapes and scenes from village life.

This unusually optimistic depiction of the Morning Toilet (sometimes also called Festive Day) is one of Czech’s most famous works. The artist did not forget to depict a portrait of Emperor Franz Joseph I in the salon. In the centre of the scene is the morning ritual of the head of the family – the wife is combing the husband’s well-kept beard. The man’s posture and look suggest the ceremoniousness of the moment which is disrupted only by the jolly frolicking of the family dog. The scene is enhanced by the dressed up girl watching the adults with a silent smile (the girl is very similar to a younger girl portrayed around 1900, cat. no. 34). The son, who understands the importance of the preparations, is bringing the father his cane. On the chair are the father’s clothes and accessories, including his pipes and hat. There are also other details completing the image of a cosy household, such as the items on the wardrobe: a glass container with Arma Christi, candleholders and vases with flowers. Flowers are also decorating the window and the table, from where they fell down onto the floor. Thanks to the blooming tulips and lilacs, we can estimate that the scene probably takes place at the beginning of May. 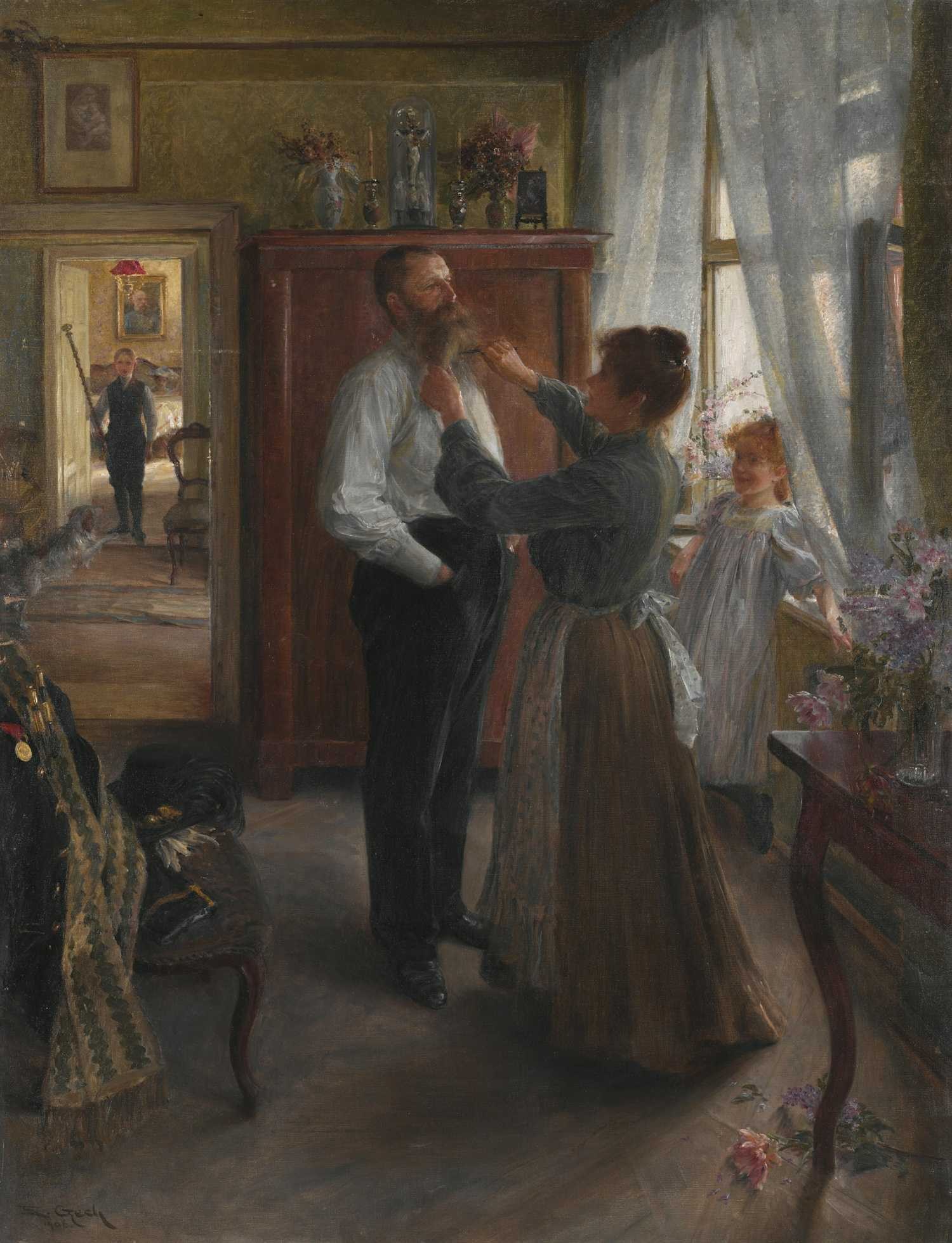