Oil on canvas, 36 × 51 cm. Signed at the bottom left: A. Calames. Olomouc Museum of Art, inv. n. O 50.
Provenance: the painting has been part of the collection of the Olomouc Museum of Art since 1951. It probably comes from the Chiari Villa in Sudkov (the writing on the paper tag is most likely mentions Berta, the widow of Alfred Chiari), which was nationalized after the war.

Calame was the son of a bankrupt marble carver who died early. To earn money he worked in a bank and only in his spare time did he pursue his hobby – painting and specifically landscape painting. In 1829  his talent was discovered by banker Diodati, who later became his patron and, thanks to him, he could study with painter Francois Diday. After a short time, Calame became independent and successfully exhibited his depictions of the Swiss Alps and forest landscapes in Paris in 1835 and later also in Berlin. During his stay in Italy he also started to paint Italian landscapes, especially around Rome and Napoli. He was praised for his apt depictions of diverse landscapes during different seasons and different parts of the day as well as for the necessary artistic detachment. His interpretations were well received mainly in Germany and his paintings of landscapes were often used in art schools; that is why he is associated with the perfectionism of the Düsseldorf School. In 1842, during his travels to France, he became interested in the romantic landscape around Mont Blanc which was, along with the paintings from Jungfrau in Switzerland, another addition to his repertoire. He became unusually well-known in France but also in England, where his popularity was increased by  lithographic copies of his works. His works were presented at an exhibition at the Clark Art Institute in Williamstown in 2006.

The unusual appeal of the Swiss painter Alexandre Calame, who was born in a country full of mountains, lies not only in his authentic and truthful depictions of landscapes.  It was his psychological mastery which was rare in landscape painting. His unusual sophisticated style with subliminal contrasts is also applied in this Olomouc painting. Mountain Landscape with a Valley – more precisely swampland – is closed with an uncompromising massif of dark mountains. The green area of broadleaved trees and bushes horizontally divides the painting in half. The painter captured the landscape in an unobtrusive sunset with reflecting colours. The whole painting is set in one colour tone. In a similar way he painted lake landscapes around Luzern with glaciers in emerald green and foamy mountain water, rising between stones from the fog and changing into clouds which are fluffy like whipped cream. There is not much we can grasp, but these landscapes have an exceptional forcefulness. This style of painting, which gives room to fantasy, caught the attention of Arnold Böcklin in Basel, who later became Calame’s pupil. 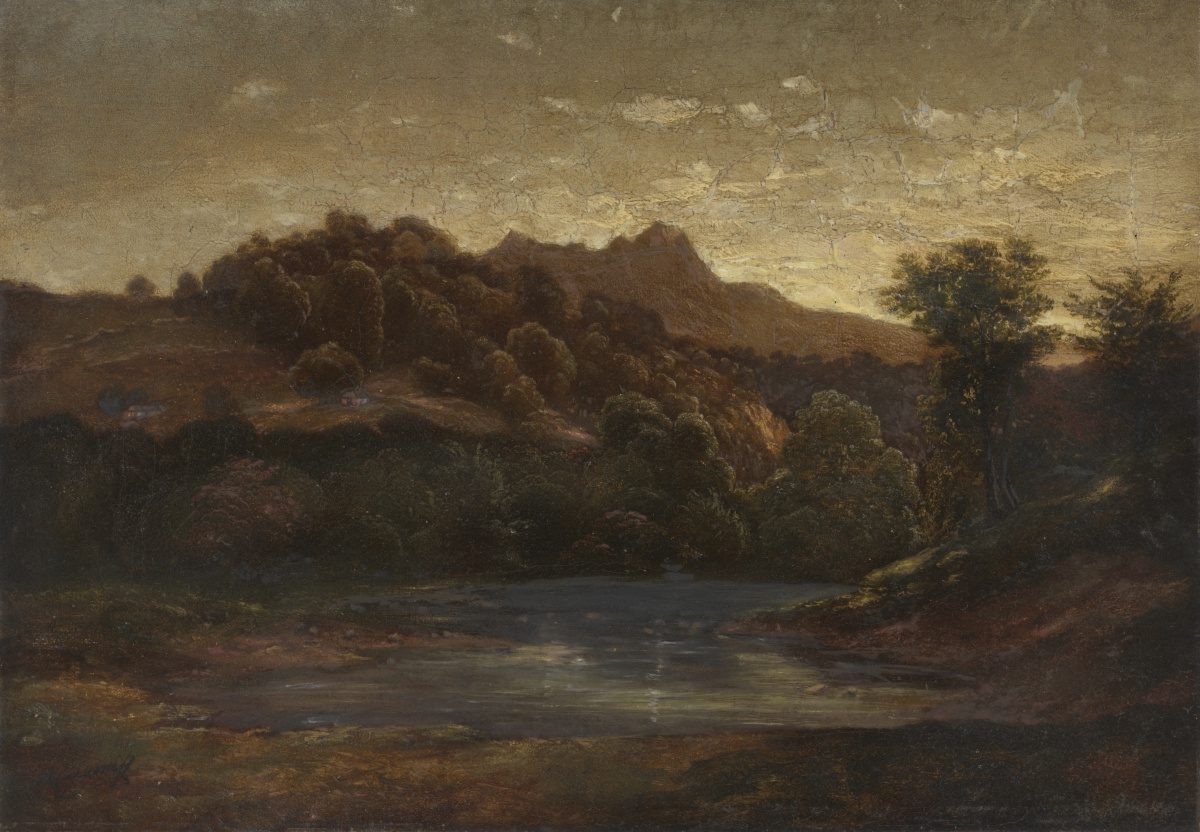