This painter focused on verismo painting style and came from a family in which painting meant living. His father was a varnisher and his grandfather František Rebec (Rebetz) was just like Jan Zachariáš Quast, a painter of porcelain. From 1873–1874 Bartoněk studied at the Prague Academy under Jan Sweerts as well as other professors such as Emanuel Rom, František Čermák, Antonín Lhota, František Sequens, Max Pirner. Even though in the beginning Bartoněk focused mainly on historical themes and painted mostly altar paintings, he also restored paintings and created wall paintings for a living (Štorch House on the Old Town Square in Prague, Old Town Market Hall, Merkur in Pařížská Street) and was basically looking for his own theme. Later on, in the incoming era of naturalism, he focused on stories with social undertones set in old Prague, which moved and interested viewers. His first exhibited painting Uneven Division (1881) was of a gloomy atmosphere and resembled works by Marold. After all, it was with Marold whom Bartoněk decided to travel to Paris where he signed up for a year-long study at École des Beaux-Arts. After his return he exhibited genre oriented scenes of peculiar Prague courtyards and streets with shops of craftsmen and houses of the poor at the Jubilee Exhibition (1891). He also presented decorative paintings (e.g. from the dining hall in Bondy’s villa, 1888). In 1895 he worked with Mikoláš Aleš and Karel Vítězslav Mašek on a diorama for the Ethnographic Exhibition, Defeat of the Saxons Under Hrubá Skála, and then again with Aleš and brothers Adolf and Karel Liebscher on the diorama Battle of Students with Swedes. Besides that, he also created illustrations (particularly for Božena Němcová’s books). He liked to join artistic clubs – he was a member of the Artistic Association, the Union of Creative Artists and also of the Society for Old Prague. However, with the incoming modernism, the works of this prematurely deceased painter were, for a long time, forgotten.

The viewers marvelled at the genre stories by Vojtěch Bartoněk which were made with an optically brilliant technique. Their popularity was intensified by their numerous reproductions in magazines such as Světozor and Zlatá Praha.

Bartoněk’s most famous painting from the 1890s, Recruits, is distinguished by its lightened frivolousness; on the other hand Patrol’s Catch (or Morning in the Street) is a portrayal of the harsh reality of the poor in Prague. The painting itself is a phenomenon of journalistic activity because it uses the most effective tool– the suffering of fellow citizens. A poor family is being led through the streets by police officers. While all the captured are walking with their heads down in a sad procession, a young woman in a red scarf looks spitefully at the plotter of the depicted disaster, the dairy-woman who gave away the hiding place of the poor and reported them to the police. The dairy-woman, however, is looking at them with satisfaction and mockery, along with her reliable customer to whom she brought her regular order on a dog-drawn cart. According to a note in Zlatá Praha (1902), it was supposed to be based on a real story. When we look at the painting, it might cross our minds that the popular and sociable painter Bartoněk might have been saddened by how cruel people can be.

This painting, with multi-layered nuances, is special not only for Bartoněk’s usual excellence in the capturing of atmosphere but also for the psychological reflection of the story supported by the greatly thought-out composition. At the same time, it cannot be unequivocally said that the painting shows elements of the heavy naturalism that Bartoněk had seen during his stay in France. On the contrary, the time in which this painting was created suggests that it is already an enhancement of naturalism, a lesson from Italian verismo with a typical ‘photographic’ convincingness. It also corresponded with the use of intense colours, which break the painting out of complete depression. This painting of this prematurely deceased and long forgotten artist belongs among his best works. It can be compared to works by the leading European verismo painters. 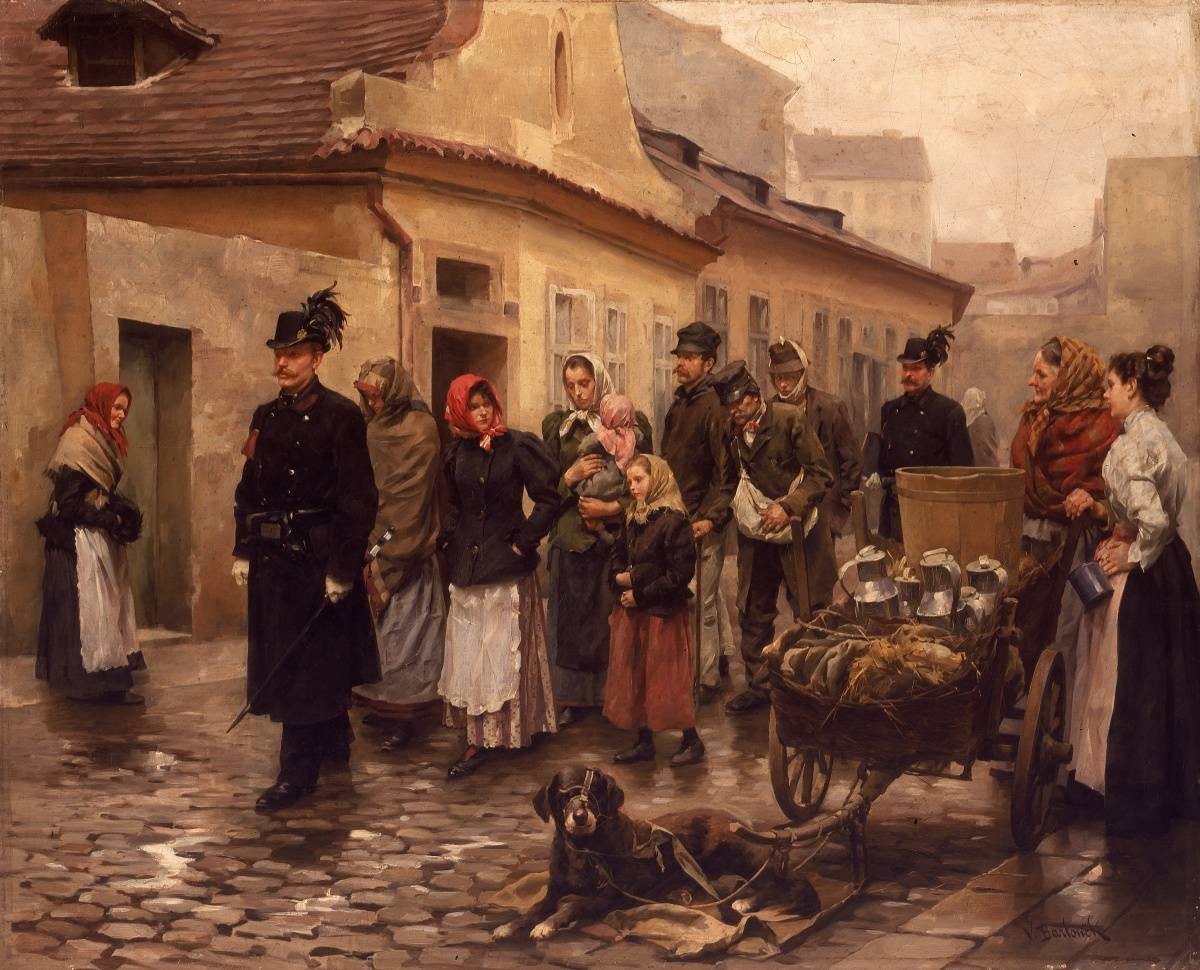