Alessandro Allori was a major representative of Michelangelesque Mannerism in Florence. Nephew of Agnolo Bronzino, whose pupil and associate he was. From childhood Allori was an exquisite draughts¬man and soon adopted the style of his teacher. He was influenced by Florentine models - Fra Bartolomeo, Andrea del Sarto, Pontormo and Va-sari, and during his stay in Rome, in the second half of the 1550s, by the works of Raphael and Michelangelo. After his return to Florence he worked for the Medici family and took part in the interior decoration of many churches, palaces and villas.

Alessandro Allori was brought up by Agnolo Bronzino, whose name-probably from gratitude - he added to his own. He did the same when he signed the Olomouc painting Christ under the Cross, commissioned by Jan Dambrowski, known as Filopon. This is described in Alloris Memoirs, kept from July 1579 to October 1584. The entry for August 13, 1583, says that he was paid by the Olomouc Dean for two paintings: the picture of the Dead Christ and the picture of Susannah (in the bath), "executed by Piero Veri, pupil, after [Alloris] work, owned by messer Zanobi Carneschi".1 Commissioning a picture directly from a renowned Florence master is evidence of an advanced culture existing in Olomouc at that time. It is to be hoped that the painting of Susannah, still missing, will turn up one day.

Christ under the Cross is important not only because of its ancient provenance but on account of its artistic quality. By being confined to a single figure, the work becomes monumental, a feature close to Michelangelos ideals, and the precision of the drawing and the anatomy of the nude stand out - Allori had a good command of both. These qualities stand out especially when the Olomouc picture is compared with the artists other works on the same theme, also from the 1580s. They are two small pictures from Buda pest (Szepmuveszeti Muzeum, No. 250) and from Venice (Seminario Patriarch ale), a picture from Chantilly (Musee Conde, No. 45) and a large painting from Arezzo (Museo Statuale dArte Me-dievale e Moderna). The impact of these works is much smaller because of their many descriptive details. In the Arezzo picture, once owned by Va-sari. the dead Christ is being deposited into the grave by three women. One of them directs her eyes and gestures towards the Virgin Mary Dolo¬rosa, standing in the right-hand upper corner next to a chalice and the tools of Christs suffe¬ring. The chalice, the crown of thorns, the nails, sponge and spear are the only props in the OIomouc picture of Christ under the Cross. The impressive simplicity of this moving scene is an expression of pietism and the spiritual atmosphere influenced by the Council of Trent. 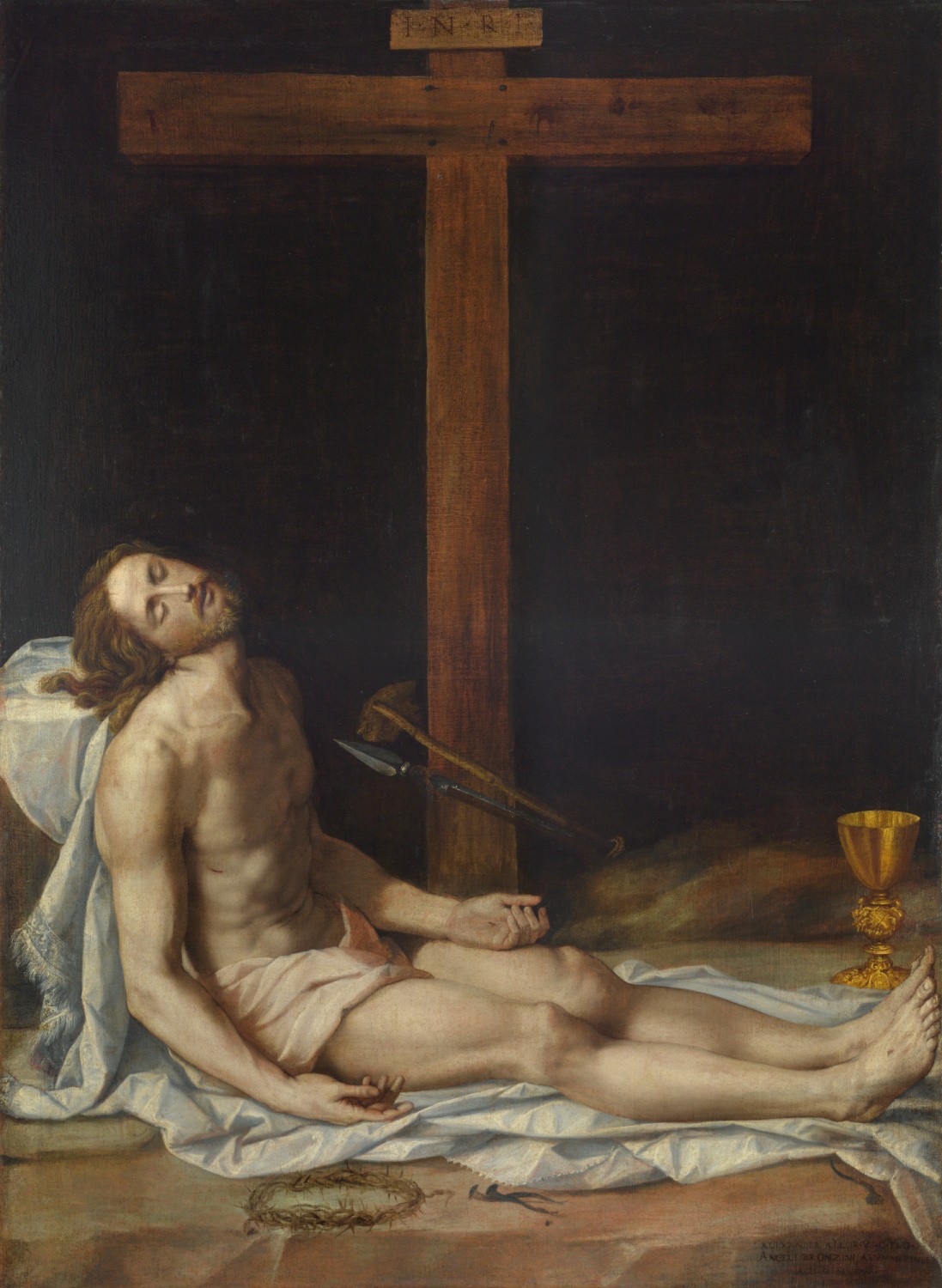 Christ under the Cross, 1583
Related