The Ministry of Culture of the Czech Republic has been preparing for several years investment grants for major cultural projects from EU sources within the Integrated Operational Programme. The Olomouc Musem of Art has also applied for the grants-in-aid with its project. If we succeed, the sum of approximately CZK 500m will be used for the foundation of the Olomouc Central European Forum (Forum). The Forum, like the other two parts of the Museum (the Olomouc Archdiocesan Museum and the Kroměříž Archdiocesan Museum) is internationally oriented. It will be focused on collecting, exhibiting and publishing activities regarding various representations of Central European art, with special attention paid to modern and contemporary art. It should become a kind of a counterpart to the outstanding collections of classical art, in order to balance the art collections available in the area of Olomouc.

In bringing the Forum project to life, we have dealt with difficult circumstances. Many times these culminated in critical moments, when we had to reconsider, whether or not to withdraw from the project, whether the price we would pay (not only financially) was not too high. We had to purchase eight plots in the vacant lot and most of their owners (with the honourable exception of the City of Olomouc) many times nearly blocked the project with their speculative requirements. For that reason the preparations are behind schedule. We have only recently finally solved the question of property rights.

The latest critical moment, so far, was related to the preparation of the architectural competition regarding the new building design and construction. We were preparing the competition in compliance with the Public Procurement Act (2006) for two years. When we addressed the Czech Chamber of Architects, to recommend or not to recommend its members’ participation in the competition based on the respektive terms, quite surprisingly, we were rejected. The chamber representatives informed us, that they considered the competition irregular and would adopt disciplinary measures against its members who took part in the competition either as competitors or members of the jury. The chambre would recommend participation only if the chamber’s requirements concerning rewards were met, which would result in the infringement of the Public Procurement Act! Due to the fact that, after weeks of negotiations, we still had not reached an agreement, we reluctantly had to cancel the competition. The fact that the draft drawings could not be prepared on the basis of a public competition that would enable a broad confrontation of individual viewpoints is a handicap indeed – a number of Czech architects intended to participate and the participation of some foreign contestants was also very likely.

Under these circumstances there was no other way but to order the architectural drawings in the form of a minor contract. What has been achieved can by no means be called only ‘making a virtue of necessity’. We turned to two of the most renowned Czech architects who we had already cooperated with in the reconstruction of both the Museum of Modern Art and the Archdiocesan Museum. We spent two summer months working with Michal Sborwitz and Jan Šépka on what is now being presented at this exhibition. We are more than satisfied with the result of our mutual cooperation and believe that it will give rise to an exceptional architectural work.

The fundamental motif of their design is polarity applied and developer on different levels and in numerous variants. They succeeded in drawing upon the polarity of the two different parts of the city meeting here – the monumental masses of Předhradí and the detailed structuring of the very city centre. There is the clear structure and rhythm of the old museum palace conceived in the spirit of the Enlightenment (Classicism) on one hand. But on the other hand, instead of the five demolished houses there are five new designed houses that also respect (with one exception), not only the uneven frontage line, but also the variable depth of the development, becoming in a way the essence of Gothic town planning. However, there are not only local circumstances: the Classical and the Medieval represent the two essential dimensions of European thinking. The first of them has always represented the classical ideal of clarity, lucidity, rationality, while the other was full of emotions.

Nevertheless, things are not as simple as that. The former Classicist building originally housing the court and the prison later served other functions (as housing, a distillery, a cinema, the Radio bar – the Theatre of Music) introducing into this purposeful order the dis-order of everyday life. Our and, above all, Sborwitz’s reconstructions from the 1990s were also intended to evoke some of the more or less real or imaginary traces of history and the creative principles of some personalities passing through Olomouc: the Cabinet exhibition hall should remind us of the long-term asylum in the Graphic Art Cabinet (Kabinet grafiky), the Discussion Hall (Besední sál) refers to the 19th century cultural atmosphere in Moravia (and also Josef Hoffmann), the Nave commemorates the vanished Chapel of the Holy Spirit, the Picture Gallery is to remind us of the typical museum salons and the Attic of the downward path of the past century (as well as Adolf Loos) with every step we take there. The reconstruction involved the effort to preserve as many details as possible.

Just a few more words about the aspect of polarity: apart from the contrasts from the view of town planning, structural organisation and style characteristic for this location, the essence of the local gully, pass, bottleneck, eye of a needle with its dramatic material, functional and symbolic concentration was underlined. As for the interior, on both floors was applied the idea of a central communication axis (the famous Le Corbusier’s promenade de l’architecture), on which partial axes are suspended (the café, former cinema, former theatre, lobby, library, bookshop and exhibition rooms). Šépka’s new building or cluster of new buildings oscillates between a somewhat animalistic dimension, between the evocation of the characteristically mediaeval but also expressively Kafkaesque den and the echo of the dawn of modern architecture in the work of French revolutionary Classicists, who attempted to replace Christian metaphysics with a more universal interpretation of the Absolute.

This polarity is also manifested in the elementary sculptural decorations: the lobby (entrance hall) in the old building will be dominated by the fountain A Child Watching an Ordinary Day (1912) by Anton Hanak, that was created for the villa Primavesi in Olomouc and personified the contemporary European idea of the forthcoming promising age of youth and progress in the years before the disastrous war. In the entrance ‘piazzetta’, a giant statue by Aleš Veselý Kaddish – A Prayer for the Dead (1967–1968) will be erected, which can be interpreted as a tragic postscript to what was to follow. Veselý’s statue will also dominate today’s University, formerly Jewish Street. Both statues will also point to what a visitor may find in the exhibition halls: the exhibition of Olomouc art (a survey of the cultural history of the Central European city with its rich history that experienced ethnic cleansing as well as the period of class struggle) and the exhibition of Central European art (a survey of the region that underwent racial cleansing and apart from the modern migration period experienced also the experiment of social engineering). This polarity is also reflected in the attempt to establish the local version of the ideal Gesamtkunstwerk – i.e. the attempt to collect in one location the fundamental cultural genres from fine art, architecture and applied art to a library with archives, chamber theatre, music and film and to create conditions for their merging and mutual confrontation.

The motifs of genius loci alone would not suffice. The authors of the architectural draft drawings have also focused on the very essence of the Museum – the former temple of the Muses – as one of the characteristic phenomena of modern civilisation. It is the question of the sense of art collecting, which does not serve a cult or representation in the first place, but which is rather an attempt at democratisation, making accessible and interpreting this elite phenomenon. So-called ‘high art’ in its modern form is a rather complicated matter, therefore the rooms with its concentrated installation should be complemented with rooms where one can také a deep breath, relax, concentrate, or take part in an animation programme.

Šépka placed the new exhibition halls in three of the five new buildings in an attempt to create a considerably magical space resonating, over the centuries, with famous interiors by Piranesi, Boulèe or John Soane (although their visionary interiors cannot be found in Olomouc, unfortunately). The specific (genius loci) and the general (the subject of the museum as the concentration of modern spirituality) are joined here by the motif of light. This again is an element characteristic in a general sense for both ancient civilisations and modern times (the absolute, the sacral, or enlightenment in the form of light coming from above and circumfusing interiors (or houses within a house) of the major part of the premises from the Classicist palace lookout tower to the apertures in the new building roofs). This motif is also characteristic of architecture of this kind (lighting as one of the features typical for museums and theatres).

What is to follow in connection with the realisation of the project? In the autumn, a competition for all the following project stages will be held; simultaneously an application for a subsidy will be prepared. Archaeological research at the site will be commenced as well. If we are granted the subsidy, the following year will be devoted to the completion of the structural design, obtaining the building permit and organising a competition for the general constructor. The construction and reconstruction work (probably in three stages) should be commenced in 2011.

Both permanent exhibitions and other accompanying activities, including publications, will be prepared simultaneously, together with the demanding removal of collections and some workplaces (in the Museum and the Theatre of Music). The Forum should be opened in the autumn of 2014 – a quarter of a century after the revolution of 1989 and the start of the independent existence of the museum. 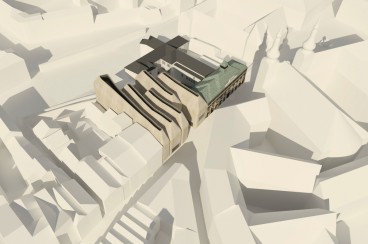 visualization of the building complex within the urban structure 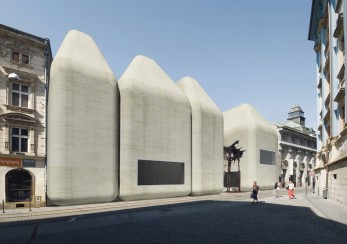 a view from Univerzitní Street 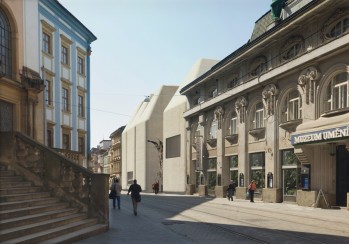 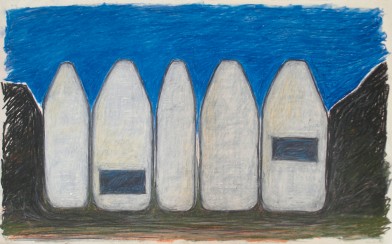 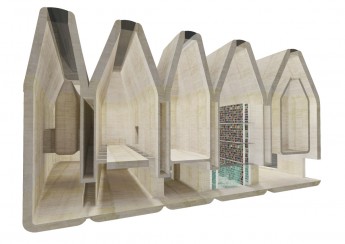 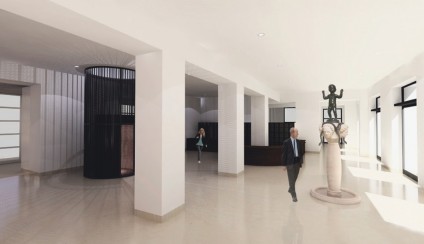 reconstruction – entrance hall with the fountain A Child Watching an Ordinary Day by Anton Hanak, 1912 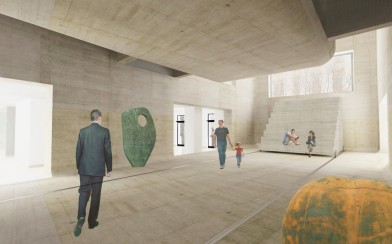 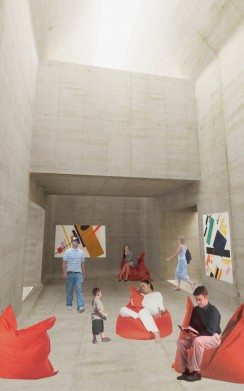 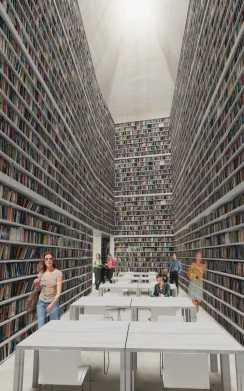 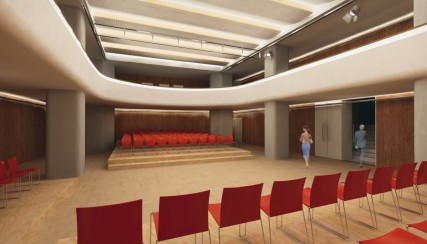 visualization of the building within the urban structure