A team of curators from the Museum of Art have been working on the Central European Art Database (CEAD) project since late 2011. Their goal is to make an on-line database of visual art and artists from the second half of the 20th century from the Visegrad Four countries. The project will be available to the public from the 1st August at the following address: www.ceadata.eu.

The main impetus for developing the database was, paradoxically, the rejection of a grant application for the construction of a new museum building: The Central European Forum in Olomouc (SEFO). The fruits of the acquisition activity which the Olomouc Museum of Art has carried out since 2008 in the Visegrad Four countries were to be presented in the new building. An exposition in the planned but not-yet-existing Forum building was to be a probe into Czech art from 1945 and into the concurrently developed  art scene of Hungarians, Poles and Slovaks in the broader social and cultural context of the time.

The basic idea of the database project was outlined by Gina Renotiѐre who initiated the project three years ago: "The format of an Internet database which will offer visual as well as textual and audiovisual data allowed us to make at least a virtual analogy of the exposition of the Central European Forum in Olomouc. It was intended to be a natural part of the planned multifunctional, cultural Central European Centre." Michal Soukup, the director of the Olomouc Museum of Art, said that the Centre was to be built using grants from the European Union. The existing museum building was to be refurbished and extended to the adjacent vacant block of land. "Even though the application for a grant for SEFO was rejected we could still work on the logistically and technically demanding CEAD project, thanks to the support of the Visegrad fund.“

A team of curators gradually processed the lives and works of forty selected artists. In cooperation with the Olomouc film studio, they made documentaries about sixteen studios of prominent contemporary painters and sculptors from Hungary, Poland, Czech Republic and Slovakia. It is a combination of documentaries,  the artists´ personal presentations, and peeks into their studios which gives the database added value; it is not just limited to textual information. Films are gradually uploaded to You Tube at Olomouc Museum of Art http://www.youtube.com/muzeumumeniolomouc. As Kamil Zajíček, the producer of documentaries, put it: "During our meetings with artists we placed the emphasis on a combination of personal memories and historical events. We tried to identify similarities between individual countries of the Visegrad area. We searched for common, often illegal, exhibition projects and disclosed personal relations through which information, expert literature, and even works of art were exchanged during the totalitarian times. We also came across peculiar cases in which artists smuggled their works to foreign countries in the hollowed out heels of shoes. Another sent them to Western Europe from an obscure post office somewhere in former Yugoslavia.“

Barbora Kundračíková, one of the museum´s curators, who was in charge of the preparation of expert textual profiles of individual artists, said about the database: "We´ve produced detailed biographical entries about artists. We keep adding information regarding where the artists studied and in what collections their works are held. We are extending the database with additional artist´s cards and, of course, we are fine tuning technical security. We have the texts translated into English on an ongoing basis. We would also like to make the works of artists from post-communist countries available to foreign scholars.“ In Kundračíková´s opinion, the database is currently comparable to an encyclopedia of approximately 400 pages. Kundračíková claims that the database currently includes thirty five artists´ entries which, besides the biographical data, provide an overview of works, lists of exhibitions, bibliographies, and a list of works in the Museum´s collections. The point is that it is only an initial state which is going to be further extended and substantialy supplemented with data from the collections of other cooperating institutions and available visual materials.

They play an important role in the database. In addition to their own collections, the Museum obtained, thanks to the cooperation with the Regional Galler of Vysočina in Jihlava and the Gallery of Central Bohemia, a number of precious images of works which are often stored in the depositories of individual institutions and which are not available to the general public. Olga Staníková, another curator of the Museum, was in charge of that area:  " We´ve established promising cooperation with the Gallery of Eastern Bohemia in Pardubice and with the Gallery of Modern Art in Hradec Králové.“  Staníková also informed us about the cooperating institutions abroad. "We´ve long cooperated with the Gallery of Eastern Slovakia in Košice and with museums in Székesfehérvár and Pécs. The Ludwig Museum in Budapest and the Zacheta Gallery in Warsaw are our long-term partners in Hungary and Poland.“

The database interface is also interesting. It is based on a freely available Collective Access system which was specifically designed for catalogues and web presentations of museums, archives, and databases all over the world. As Beata Rakowská, the database designer, put it: "The software is largely used by American cultural institutions. For instance, it is used by the Museum of Contemporary Art in New York. It is an official platform for French institutions within Musées de France and for a great many other independent European organizations.  For example: Arsenal, the institute for film in Berlin, Kalmar Konstmuseum in Sweden, Vlaamse Kunstcollectie in Belgium, and the Jewish Museum in Prague.“ The database will be available for all interested parties at several levels: from the administrative level to the user level.  The major part of the data will be made freely available without any limitations.

The final version of CEAD represents a large and dynamic database of visual art across all V4 countries. It provides the general public with the first information on selected artists and works. "It will also provide a more detailed insight into the development of art in a given period of time. The database will combine information on works of art in selected art collections with information retrieved from the archives,“ said Kamil Zajíček, project producer. In his opinion, CEAD will work as an alternative virtual depository for the cultural memory of the historical epoch of the communist totalitarian regime and the period immediately following its collapse.  Additional texts will provide information on the situation in individual regions. The database interface will offer the option of creating a virtual gallery in which it will be possible to view the works of individual artists in the form of alternating exhibitions, and to find their reference in cross-sectional topics from the second half of the 20th century. Curators will also inform the public about the ongoing events on the art scene in Central Europe. "We aim to identify similarities and differences in art and in an entire culture in the V4 countries in  relation to similar historical events,“ said Štěpánka Bieleszová, project curator.

And what about the Central European Forum project whose expert contents constitute part of the database? The Museum director does not consider the project completely dead. "We will try to at least finish the refurbishment of the existing building in Denisova street. It involves, for example, the building of a barrier-free entrance, elevators, a new visitors centre, the reconstruction of the former Central cinema for the purposes of the Music Theatre, and the conversion of the existing premises of the Music Theatre into a research centre, library, and archives.  It will be in the research centre where the CEAD project will find its application,“ said the museum director. CEAD will be made available from 1 August 2014 at ceadata.eu. Its public presentation and the opening of a small projection room for documentaries is to take place on 16th October 2014. The Museum will also open a new entrance to the building at the same time. 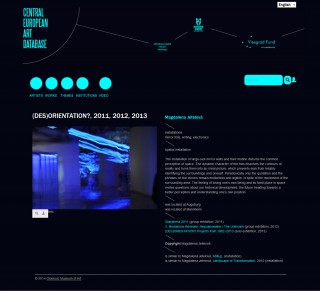 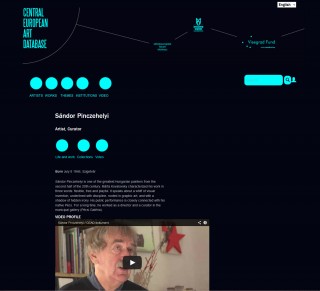