The fourth edition of Art Brut Film focuses on Poland

In the Olomouc Archdiocesan Museum will be held for the fourth time Art Brut Film - a festival of films focusing on the phenomenon of art brut, or outsider art, a sense uncorrected, spontaneous art. The organizers of this year turned their attention to Poland. Wednesday, April 8th from 18 hours to spectators waiting six short films. "Make the performances Slovak guitarist Juraj Doric," said organizer Pavel Konečný.

While last year the organizers presented the works of a single author - a major filmmaker Philippe Lespinasse, this year will focus on authors art brut from a single country, from Poland. "Polish scene we know little or nothing. We have established contact with the theoretical therefore Daszkiewicz Joannou, a pivotal figure Festival of Films on Art Brut in Poland, "said organizer Pavel Konecny.

"Art Brut in Poland is mainly associated with the art of people with disabilities at risk of social exclusion. This causes a lot of confusion. An artist who can not function independently of the art market, usually doomed to the fate of a dove among hawks, "described the specifics of the Polish scene art theorist Stanisław Jasiński. And the opportunity to present the audience with creative and eventful life stories of artists enriches Olomouc show an important dimension. "Art Brut Film and also has an educational aspect," said Pavel Konečný.

The program consists mostly of fourth grade films that appeared in 2013 on the first festival AUT in Poznan, which specializes in short films about artists Samouco. Blok films organizers will be music performances, namely performances Slovak singer and guitarist Juraj Doric from Martin, who has for years devoted to the study and interpretation of folk songs and their own original work. "We hope that minikoncert introduced into the film shows another creative dimension and contributing to the warm atmosphere of the festival," said Pavel Konečný.

Art Brut Film Olomouc will take place on Wednesday, April 8th from 18 hours in Olomouc Archdiocesan Museum. It is organized by Pavel Finally, in cooperation with the Museum of Art in Olomouc and civic associations abcd Prague. The term "art brut" was first used in 1945 by the French artist Jean Dubuffet and theorist. Art brut, the "raw art" or "art in raw or natural state", characterized as "artistic productions of all kinds - drawings, paintings, embroidery, modeled or carved sculptures that show a lot of creative spontaneity and imagination are the least possible indebted to the usual arts and cultural templates". 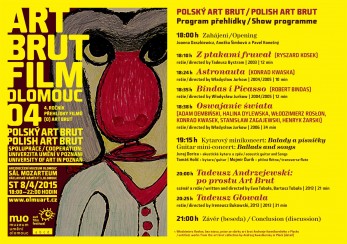