The original theatrical experience promises opera by Daniel Rusek Havel and Reed. Work with minimalist motives of the finitude of human life, which will world premiere on November 12 at the hall Mozarteum Archdiocesan Museum, is because David Hrbek interview with former president Václav Havel and musician Lou Reed. The performance is part of the Festival Opera Schrattenbach.

The opera was due Hrbek nudge to the composer Tomáš Hanzlík after the first prose set to music. "When you can do everything, try interviewed. Eventually, he did his student Dan Rusek,"said Hrbek. According to him, the conversation but slightly modified. "Thats because Lou was severely complicated personality and the mood changed with him a hundred and eighty degrees snap of the fingers," he explained.

Make a theatrical doubleinterview lasted about two years and Reed it finally arrived with a 45-minute delay. "The first half was both a tie and many questions answered curtly. Although he had sent advance questions from New York agreed, then he wondered during an interview, why ask him to manager of the Velvet Underground, Andy Warhol with the caveat that he did not Warhol. A break and a nap in the second half was enjoyable," remembered Hrbek. Doubleinterview ten years ago had "rescued" more communicative Václav Havel.

To the run-trough new opera Hrbek doesn’t goes. Apparently he wants to unnerve the musicians. Premiere on November 12 at 7 PM but can not let pass. 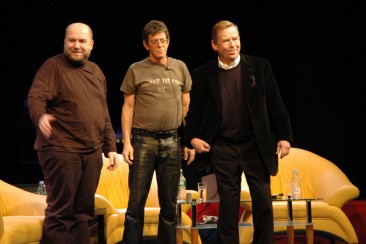