At the age of 62 years died in Olomouc on Sunday, March 8, 2015 after a long and severe illness, longtime director of the Olomouc Musical Theatre, gallery curator and artist Libuše Šlezarová.

Born in 1953 in Šternberk, the home of her childhood, however, was Jívová, a village in the low Jeseníku, for a decade marked by the postwar expulsion of the German inhabitants.

Here Libuše taught love of nature, the joy of the ordinary and yet basic things, here it grew powerful empathy for other human beings and for all living things at all - property, for which he had until the end of life will weigh most of those who met her.

After studying at hejčínská grammar school in Olomouc (1968-1971) graduated in 1976 at the same place at the Philosophical Faculty of Palacky University sociology and pedagogy. Its field, but focused only briefly as a social worker at the former District National Committee. Since 1982, she worked as a specialist District Cultural Centre (OKS) in Olomouc, where she also caught the November revolution of 1989, which is as a member of the Civic Forum participated actively.

Even in Revolutionary times was the beginning of 1990 appointed Head of the Olomouc Musical Theatre (DH), which was at that time part of OKS. Libušino efforts to separate legal status "déháčka" has been fulfilled, and from September 1990, the theater was established as an independent charitable organization of the city. This unobtrusive and formal step proved to be crucial for the very existence of the theater. As its director from him in over twenty three years has built a modest, yet significant cultural scene, focusing on alternative or marginal genres of art.

The material need company in the 90s faced a similar formal approach to culture, which once proclaimed Marxist theory of culture as superstructure, was able to make a virtue and built a still living tradition of presenting visuals worthless puppet theater smallest audience. Puppets and dolls of all kinds were, indeed, her great love - their magic lectured schoolchildren, students, and puppetry in the world were focused as a little one. The doll was a sort of basic motive of her work, using different materials (textiles, papier-mâché, wood, wire, bones, natural) form a larger or smaller cycles, the time in her studio jívovském born multitudes of fascinating characters-silent witnesses , referring to the wide scope esthetician from Calders circus to mechanical magic dolls Michel Nedjar.

Significantly limit at least the last ten years Libušina life was her health. Admirably suffered one illness after another, in spite of them managed the theater, repairing birthplace, was actively involved in civic life Jívová, took care of her beloved granddaughters and nieces. She had something of holiness while jurodivosti Russian elders who have been allowed for the first second.

There is no exaggeration to say that Libuše Šlezarová belonged to slowly leaving the cultural elite of our city. Not because it would be a famous artist or phenomenally successful organizer of festivals, but because it matched by European tradition of deep humanistic education is equally deep feeling for beauty - all with the knowledge of temporariness and transience of the individual. 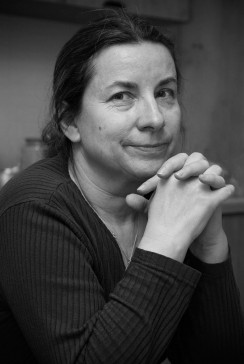 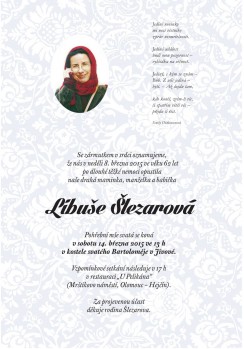