Until the September 4 issue of El Greco Adoration of the Shepherds back across the ocean to New Yorks Metropolitan Museum, a permanent exhibition at the Archdiocese Museum will undergo changes in the past. There are a total of almost one hundred.

Modified to form a permanent exhibition In Glory and Praise|Thousand Years of Spiritual Culture in Moravia got a serial number II. Although at first glance it may seem that exposure remained the same, the changes have affected virtually all of its parts. Somewhere dramatically, sometimes only cosmetically. "The transfers and exchanges took place in the exposition of archeology, Gothic art, in both picture galleries and the baroque halls," said curator Helena Zápalková. 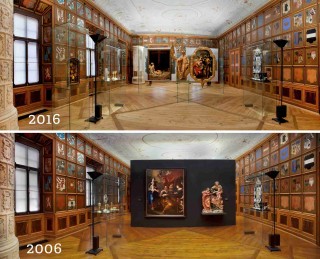 He underwent a dramatic transformation Knightshall from which disappeared built Cabinet textiles, in which the liturgical vestments. Installation is now airier and gives more shine unique decoration with the arms of Olomouc canons. It is exposed as paitnting Baptism of Christ by Johan Christopher Handke or statue of St. Wenceslas from the original baroque pulpit Olomouc Dome. It is now located in the hall selection ivory objects from the collection of Archbishop Leopold Prečan.

"For the first time after its restoration in the baroque halls of the Passion of Christ statue from the mid-eighteenth century, one of the masterpieces carved works Ondřej Zahner," said Zápalková.

Neither Stair Hall edits spared. Instead of a "widescreen" six meters long canvas by František Vavřinec Korompay there are now two restored late baroque paintings rector of the Vienna Academy by Paul Troger. A former Cabinet dIvoire, where they were exposed to examples of Prečan treasure turned into a second treasure, which represents the goldsmiths art and textiles used in the context of Christian worship. The room will also serve to exhibiting extremely sensitive subjects - such shrines. 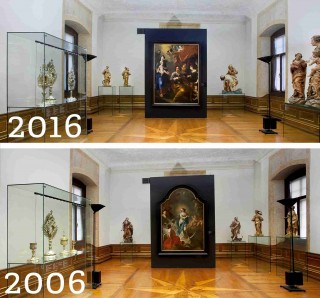 The most important innovations in the exhibition Gothic placement Křivákova Pieta from the 90s of the 14th century and altar from village Lubina. It is therefore one of the finest Czech Gothic sculptures belonging to the beautiful style, and four sides painted plates from the 15th century, which originally served as an altar retable wings.

"Marl Křivákova Pieta, which have recently been restored, it is also significant that unlike many other medieval sculptural monuments preserved its original color," said co-author of exposure Jana Hrbáčová.

New exhibits in 16 halls is to many. It is worth to ascertain on the spot. And although exposure has an attribute of permanent partial changes may be due to the sensitivity of materials expected in the future. Actually, we can say that the return of El Greco paiting will be the first one. "On the same wall will be installed after eight paintings of Italian provenance, because the second room gallery is devoted to the Italians," said curator Gabriela Elbelová. The most dominant renaissance will board the Last Judgement with Christ between the Virgin Mary, St. John the Baptist and the apostles (1601) by Giovanni Balducci, called Cosci. In addition there is a Renaissance canvas The Martyrdom of St. Lawrence by Giuseppe Ports from the 60s of the 16th century.